In her dazzling new collection Bright Raft in the Afterweather, Jennifer Elise Foerster confronts humanity’s dangerous ecological imbalance, immersing readers in a narrative of disorientation and reintegration. She recently answered five questions from her editor Scott De Herrera about her work:

A number of recurring figures from your previous work continue to inhabit the poems throughout this collection. How do their journeys compare to yours as a writer?

I appreciate that you ask about the journeys of these figures, as to me they are quite their own figures. Sometimes their journeys are a silhouette of mine; other times they diverge into places I can’t see. Magdalena appeared under many guises in the first book – the woman in the blue dress by the gas station, a reflection of myself in the mirror, birds . . . I’m not sure where she is now, still hovering in mirages, I think. She is what is almost visible. Hoktvlwv was present in the first book, but I didn’t meet her until I reached the coastline, when I moved to San Francisco from New Mexico in 2005. The second book developed from that edge of the continent, even though I wrote it while living in Colorado over the past three years. The poems and figures usually form themselves after I have encountered them—they are like the afterweather, I suppose, of a journey.

You employ a vocabulary and diction that reveals an intimate knowledge of science and the environment. In what ways did this inform your use of imagery as you rendered the worlds occupied by each character?

I wish I had a clearer knowledge of science and the environment—this is one of my goals, in fact. I’d like to take some classes in geology, astronomy, physics, and ecology. I feel my sense about the environment is only intuitive, and there is so much to learn. The imagery of these poems arrived out of my sense of the environment. If I were a painter, I would paint natural landscapes, atmospheres . . . I’m just not as compelled by the visible world of human-made things, including how we appear as people. I think this translates into why I write what I write. The characters of the poems are suffused by their ecologies and energy systems, including those systems we can’t see.

One of the issues you confront is that of ecological imbalance and the health of the planet. How can poetry contribute to the broader discussion surrounding climate change and humanity’s impact on the Earth?

This is something I think about all the time. I am haunted by the worry that poetry is not, right now, effective enough. This may be a version of my own sense of inadequacy in effecting broader healing. But I do deeply believe that poetry has the potential to transform us if we embrace it in our society as a way of seeing and comprehending. The poem can innovate language to expand the possibility of comprehension, to reorganize the perception of the known and imaginary. Poetry it is, I believe, the only word-based language that can transform us in this way, that can reveal the invisible landscapes, histories, and stories that we’ve forgotten, that we need to remember in order to continue. When I say “transform” I’m talking about healing, which naturally involves ecological balance. Despite my worries, I am still writing poetry, and will continue to, because I believe in its possibility. Poetry is especially needed in this country, which has written over and attempted the erasures of the continent’s long-standing dynamic cultures, peoples, and ecosystems. We must insist on poetry as part of our conversations and educational systems. I don’t know the most effective way to do it, but this is the work I’m committed to.

Can you tell us the story behind the visual “word hurricanes” at the opening of each section?

These four visual pieces (I like that you call them “word hurricanes!”) are from a book I made called “Of.” About two years ago I reviewed all of my unpublished poems (many of which became poems in this book), and realized I had a concerning habit. I counted hundreds of “of” constructions through the poems! To break this habit, I thought I’d exhaust it, so I made up a method of reorganizing all of these constructions, and used Excel, a printer/scanner, and scissors to make a book of these “hurricanes.” I have only an original version of this book – since I made each page manually there isn’t any digital evidence of its process. Preserving a few of these pieces in Bright Raft felt like a way to acknowledge the book’s swirling origins. Also, the pieces feel like weather—the way words transmute in our processing of patterns.

What topics or trends in literature excite you the most as a poet?

I’m excited about cross-genre work coming out, especially the poem-essay.

Jennifer Elise Foerster is an alumna of the Institute of American Indian Arts, received her MFA in writing from the Vermont College of Fine Arts, and is a PhD candidate in English and Creative Writing at the University of Denver. Foerster is the recipient of a 2017 NEA Creative Writing Fellowship, a Lannan Foundation Writing Residency Fellowship, and was a Wallace Stegner Fellow in Poetry at Stanford University. A member of the Muscogee (Creek) Nation of Oklahoma, Foerster is the author of one previous book of poems, Leaving Tulsa. 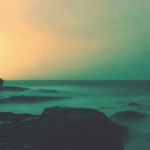