We are pleased to announce that Georgina Drew’s River Dialogues: Hindu Faith and the Political Ecology of Dams on the Sacred Ganga received an honorable mention in the inaugural 2017 James Fisher Prize for First Books on the Himalayan Region, conferred by the Association for Nepal and Himalayan Studies (ANHS).

The Fisher Prize Fisher Prize honors books that contribute an innovative and lucid written account of Himalayan studies research. In the words of the prize committee, “River Dialogues uses ethnographic methods of journalistic realism to explore the ongoing debate over the Ganga river’s natural and constructed future. A remarkable book, River Dialogues examines how women in particular protest the building of hydroelectric dams on the sacred river and the private industries and government efforts to build them in Uttarakhand, an officially designated conservation zone.”

ANHS is the oldest academic organization devoted to the study of the Himalaya in the United States. Congratulations to all of the honorees! 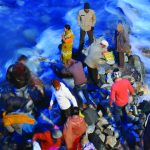