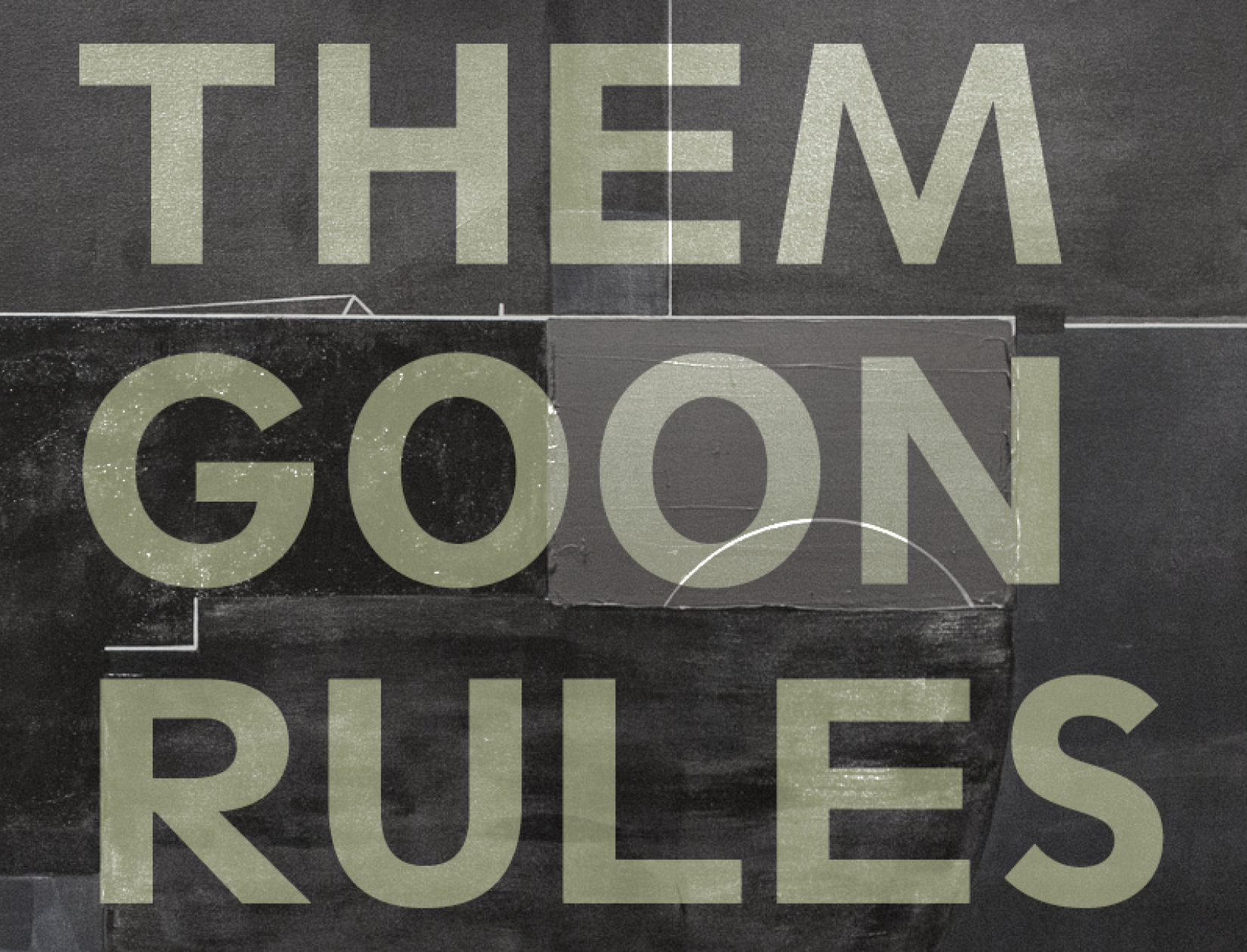 A series of essays that reads like a critical memoir, Marquis Bey’s Them Goon Rules queries the function and implications of politicized Blackness, Black feminism, and queerness. Bey binds together his personal experiences with social justice work at the New York–based Audre Lorde Project, growing up in Philly, and rigorous explorations of the iconoclasm of theorists of Black studies and Black feminism. Bey’s voice recalibrates itself playfully on a dime and today we’re excited to share a brief excerpt from this much anticipated debut:

Whence We Are Sent

These people are my access to me; they are my entrance to my own interior life. Which is why the images that float around them—the remains, so to speak . . . surface first, and they surface so vividly and so compellingly that I acknowledge them as my route to a reconstruction of a world, to an exploration of an interior life that was not written and to the revelation of a kind of truth.

I was sent, tell that to history.

If I am here, wherever here is, it is because I was sent here by folks who have been putting in work for a minute. I am here with them even if they are not where I am. We collide in a critical intimacy where what I say is only possible because it has been made so by things that they’ve already said. A method for living, of sorts, this intimacy is rugged. This intimacy fissures boundaries imposed, a method that methodically interrogates methodology. Methodological interrogation is the fugitivity I will be speaking about; it is a way of inhabiting the world, a posture of interrogation and refusal, like on some perpetual Nah-type shit; a breaking of the regime that tried to fix us but didn’t know that we arose in the breaking, were made by a breakage that generates the refusal to be broken. A sustenance by way of getting out of the maelstrom of the typical is what I mean. The sustenance is engendered by experimentation, improvisation, unruliness, because their rules stifle what comes in the break of the cut. It’s where we keep finding life lived otherwise, life on the run in inexhaustible exhaustion.

If this running is a political, disruptive act, then here I want to engage that disruption, revel in it, let it flex on ’em with humbled hubris. The life of my mind, my intimate, my private past, is, as any feminist worth their salt will tell you, deeply political. I want to speak from that private, underground place where sinners dwell, where sin as a transgressive act against divine law is what is shared between us; where we keep open secrets of queer conspiracies whispered on underground rooftops; where we use vernacular, words that break free of grammar’s lexical dictates: we fix food instead of cook it, cut instead of turn lights on, so they can’t figure out what we talmbout. Our den of sin, as it were, our promiscuous and shadowy presence, preserves a space for stowaways to be, and choose to be, stowed. This is fugitive coalition, fugitive kinship. This shadowy, stowaway presence, reminiscent of wrecked ships—which is to say, ships we have brought wreck to—is the knowledge and livelihood of fugitivity.

I grew up in Philly and its outskirts, where hip-hop was our unofficial language (Power 99 fm; 100.3 The Beat!), unlaced Timberland boots and Carhartt jackets were our unofficial uniforms, summer mornings were the color of orange juice mixed with fresh blood, and you carried an entire archive of meaning based on which part of Philly you repped. We lived right next to an abandoned house, no porch—like, that shit was just gone—so my cousin Marcus and I would go down into the basement of the house, rummaging around in the subterranean belly of its structure, before we’d get scared and run out. (Well, I got scared.) Unbounded curiosity, we youngbuhls had. To dare to explore without the presumption of conquest, an exploration of the interstices of the indoors with the wilderness-knowledge of the outdoors, is an outlawish and out-of-lawish praxis. And it stretched to our imaginations: we revised video game narratives, yearning for larger worlds. We imagined worlds filled with live Pokémon, with Charizard’s and Mewtwo’s tenacity. We lived loudly in our minds, oozing with vitality while simultaneously surrounded by poverty. We tried to remain afloat, but some of us did not, as they misguidedly say, “make it.” Marcus fell prey to the conditions that middle-fingered our lives from our inception. His thin 6′3″ frame not eradicated, but reduced to being bound indoors with cigarettes and television. Now, more than two decades later, still two years older than me, still funny on the sneak, still with calligraphic handwriting, Marcus rests largely skill-less and jobless after a raucous bout with  drugs—marijuana, cocaine, heroin too—and diagnosed schizophrenia. What happened here, cuz? What stingy alchemy concocted a brew so pungent as to singe your flourishing?

He seemed to have picked up a fate similar to that of so many people we cohabited around. The plight of the Black and poor. But I am awed, truly, at how joyous and dope our lives were despite the fact that we were geographically destined for not only economic but also emotional poverty. I am awed, in other words, at how we still live. We crack jokes in the face of abjection. Like that Christian messiah who did not die, who is said to live perpetually in the all of the world, we have always and already risen, Jesus-like, because the only ones who can feed that many people with such paltry rations are “big mamas.”

It’s like Double Dutch in the streets, making the passing cars wait until you trip up—but you never trip; like laughing at cartoons, your  body and the TV on the floor so the bullets flying inches above you from drive-bys don’t interrupt Spongebob and Patrick’s shenanigans; like cookouts where your niece is telling everyone how beautiful her dark skin is because the sun loved her so, so, soooo much, or where your uncle is acting a fool, talking about how he “still got it” even after his six decades of life. Despite every reason not to, we still smile, we still laugh, we still love, we still Black, y’all. We still. We lived, we sang, we danced, we gleaned textured life from a milieu that said we weren’t supposed to celebrate our own existence. Our joy was, and still is, radical.

We made do with what we did and didn’t have. Imaginative games became not only fun but also life-sustaining. We flourished in the face of abjection, like Nah, we don’t do that over here. And we made do, in the simplest of ways. Like, you wanna play some basketball? Well, you ain’t got no court, but you do have a milk crate, some nails, and a telephone pole. We cut out the bottom of one of those orange milk crates, climbed on somebody’s shoulders, hammered some nails into that jawn, and voilà, basketball in the ’hood. I was forged in this resilient and inventive space.

But when I wasn’t shooting hoops—or rather, shooting crates—I dwelled in the recesses of my own fraught mind, the “break” in which Black life is situated, where unavoidable subjection meets a radical breakdown. Or a radical boogeydown. I was a precocious kid, but quiet. I preferred to listen—listen for knowledge, for language, for the texture of the in-between space housing the incendiary edges of life.  I’d lay low, though that is not to say that something wasn’t going on. I spoke infrequently, as I understood the consequences of speaking out of turn, “talking back.” In the “old school” from which Mom and Grandma hail, where they plait switches to tear into insolent youngsters, children were meant to be seen, not heard; they were meant to be obedient, to stay in line, which stifled my unchained and unchainable thoughts. But I knew not to invite punishment, the backhand lick, the slap across the face that would catch you off guard, the I wish you would. My laying-low covert ops were a strategy of survival, a way to ensure the continuation of the thoughts they couldn’t stop me from thinking.

Marquis Bey’s debut essay collection unsettles normative ways of understanding Blackness, Black feminism, and queerness. Them Goon Rules is an un-rulebook, a long-form essayistic sermon that meditates on how Blackness and nonnormative gender impact and remix everything we claim to know. 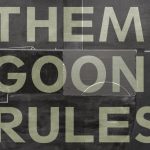