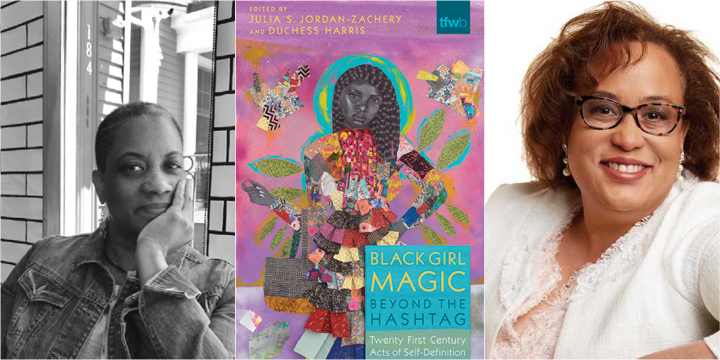 In their new UA Press volume, Black Girl Magic Beyond the Hashtag, Julia S. Jordan-Zachery and Duchess Harris have compiled essays which dive deeply into twenty-first century acts of self-definition, especially that of Black femmes, girls, and women. Black Girl Magic Beyond the Hashtag shows how Black girls and women foster community, counter invisibility, engage in restorative acts, and create spaces for freedom. Intersectional and interdisciplinary, the contributions in this volume bridge generations and collectively push the boundaries of Black feminist thought.

Below, read an excerpt written by Julia S. Jordan-Zachery and Duchess Harris from the introduction of Black Girl Magic Beyond the Hashtag.

“Jamila Woods, in her song “Blk Girl Soldier” (2016), sings of BlackGirlMagic. But what does it mean when we, self-identified Black femmes, girls, and women, invoke BlackGirlMagic? The term BlackGirlMagic is used across age, class, education, and other social identity markers. But it begs the question, what is BlackGirlMagic? Why do black femmes, girls, and women feel the need to consider themselves magical? What are we haunted by that is soliciting a response that asserts Black girls and women are magical? What ontological and epistemological questions does BlackGirlMagic pose? How does use of the term magic subvert Western thought that is grounded in positivism, rationalization, and empiricism? These are the questions that serve as the wellspring of this edited collection.

“Since introduced by Thompson in 2013, the term #BlackGirlMagic has been used widely, and it has become part of the lexicon of digital Blackness. To some extent, it has also become commodified (for example, by the selling of T-shirts and other merchandise). While the notion of BlackGirlMagic spreads in cyberspace and other places, the question remains: How is BlackGirlMagic experienced offline? The chapters that comprise this volume address this question. They move us beyond social media’s visual representations by offering analyses of the lived experiences of Black femmes, girls, and women, and how they negotiate the politics of invisibility through intracommunication methodologies in their efforts to arrive at self-definition and self-valuation and restoration. The chapters herein speak to how Black girls and women foster community, counter invisibility, engage in restorative acts, and create spaces for freedom. In essence, they show how Black femmes, girls, and women practice #BlackGirlMagic.

What the collection shows is that the labor required for success is not magical. It is real, and this labor can— and almost always does— exact a cost from those who might appear magical.

“By considering #BlackGirlMagic as an idea and an ideography, we are better positioned to understand how Black femmes, girls, and women perform magic. What the collection shows is that the labor required for success is not magical. It is real, and this labor can— and almost always does—exact a cost from those who might appear magical.

Deploying various qualitative approaches to unmask the essence of Black femmes’, girls’, and women’s perseverance against oppressive structures, the chapters in this volume paint a picture of the magic used by Black femmes, girls, and women. As they fight for recognition, and as they persevere against oppressive structures, the chapters show how the magic displayed in digital spaces such as Twitter is a combination of joy, pain, hope, fulfillment, anger, disillusionment, fatigue, and a commitment to justice and freedom. The term invokes how Black femmes, girls, and women live on the margins while also being insiders. It simultaneously emphasizes cultural specificity and difference, oppression and liberation. In a sense, #BlackGirlMagic is a mixture of the objective and the subjective. Additionally, it is both a discourse and performance. #BlackGirlMagic can be read as a political, cultural, and historical interpretation of Black femmes’, girls’, and women’s lives in relation, directly and indirectly, to Western philosophic thought. If read in this manner, #BlackGirlMagic is a form of resistance. The assertion of #BlackGirlMagic seeks to establish truth, order, and reality as understood from Black femmes’, girls’, and women’s perspectives.

Black girls and women are humans. That’s all we are. And it would be a magical feeling to be treated like human beings— who can’t fly, can’t bounce off the ground, can’t block bullets, who very much can feel pain, who very much can die.

The various themes that link the chapters that make up this edited volume bring us a little closer to answering these questions. As a collection, the chapters show how Black femmes, girls, and women choose to “gaze back” at neoliberalism and multiple, interlocking structures of oppression.

Julia S. Jordan-Zachery is a professor and chair in the Africana Studies Department at University of North Carolina at Charlotte. Her interdisciplinary research focuses on African American women and public policy. Jordan-Zachery currently serves as the president of the Association for Ethnic Studies.

Duchess Harris is a professor of American studies at Macalester College. She is a scholar of contemporary African American history and political theory. She is the curator of the Duchess Harris Collection, which has more than sixty books written for third through twelfth graders.

Black Girl Magic Beyond the Hashtag belongs to the Feminist Wire Book Series. The Feminist Wire Books: Connecting Feminisms, Race, and Social Justice is a new series from The Feminist Wire (TFW) and the University of Arizona Press that presents a cultural bridge between the digital and printing worlds. These timely, critical books will contribute to feminist scholarship, pedagogy, and praxis in the twenty-first century. 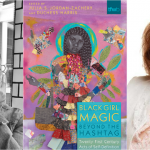