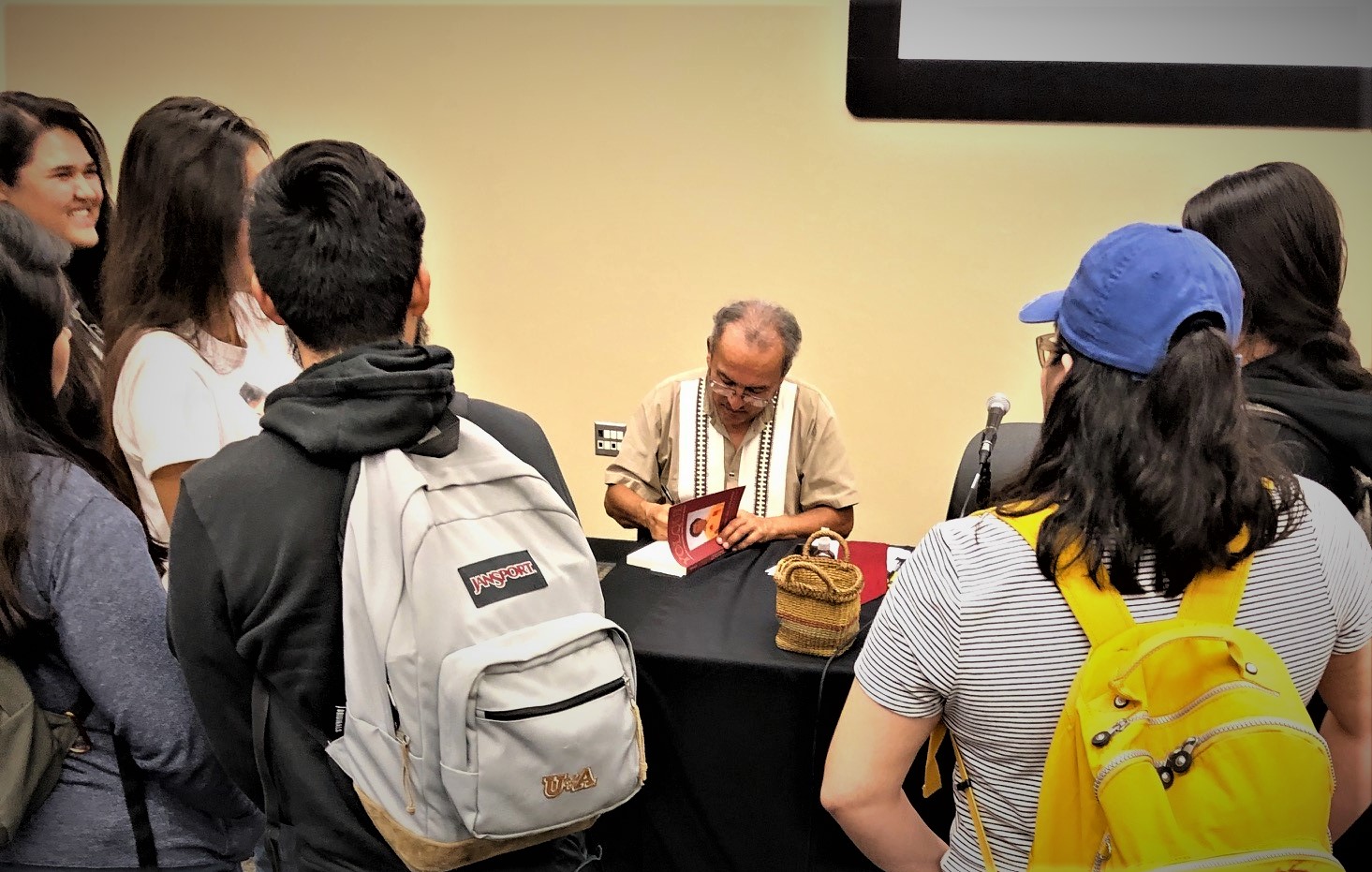 More than sixty people came together in the University of Arizona Bookstore on Thursday, November 7 to listen to Roberto Rodriguez talk about his latest book, Yolqui, a Warrior Summoned from the Spirit World, Testimonios on Violence.

The evening began with music from Miroslava Alejandra accompanied by guitar. Alejandra’s performance included a La Llorona song that incorporated a prayer printed in Yolqui and relayed to Rodriguez by Los Angeles elder Ofelia Esparza. Esparaza also attended the book release celebration, opening the event with a ceremony and prayer.

The prayer in the book, according to Esparza, was recited as a blessing over children during different times state violence worried mother’s hearts–an eternity. Esparza blessed her children reciting this prayer any time they headed out of the house.

Virgin of Guadalupe,
I leave my son in your hands,
The Sleepy Lagoon Case, Zoot Suits, and Fingertips 47
Protect him from the police
and from those who are always looking for
someone to beat on.
My son, be careful.
Do not look at the police.
Do not ever look them in the eye.
If they call out to you
or if they question you
do not respond to them forcefully.
Always obey them.
Dear God, please take care of my son.

Following the prayer, University of Arizona’s Dr. Patrisia Gonzales read the poignant and meaningful forward she wrote for the book:

“As one of you who has helped call back our fires from the traumatic pasts,
I know the resonance of justice: the impulse of the universe is more powerful than violence; in the long arc of time, our spiritual laws are more powerful than oppression. And in that flux of life that gives potential to all is love, love for life, love for each other, love for Great Good, love that makes revolutions around the suffering, so that we may continue—and undo this present of the future. For yolqui, we are not yet a spirit,” Gonzales read.

Joined by three of the 18 contributors to the book, Juvenal Caporale, Michelle Rascon-Canales, and Arianna Martinez, Rodriguez explained the history of this new book while a slideshow of victims of state violence hung above, showing faces like Ruben Salazar and Sandra Bland.

Roberto Rodriguez, also called Dr. Cintli by his students and colleagues, has been at the University of Arizona for almost eighteen years. During that time he has stood by students traversing difficult challenges, such as the Mexican American Studies battle between the State and Tucson Unified School District. However, through those years and others, Rodriguez has only talked about what happened to him forty years ago on the periphery of his life–writing articles and stories on state violence against Red, Brown, and Black people and communities, and other social justice issues.

Rarely has he brought up his own experience of being severely beaten by a group of Los Angeles County deputies in retaliation for photographing a vicious beating in East Los Angeles by a different group of deputies. The trauma of that violence has followed him every day since often making it difficult to return to that night, especially in public settings.

To ease the difficulty of the evening and discussion, Tania Pacheco led the crowd in a guided meditation. During the book signing, Rodriguez was surrounded by a group carrying backpacks on their shoulders asking him questions. With pen in his hand, Rodriguez often looked up at the faces around him with a wide smile–his students. 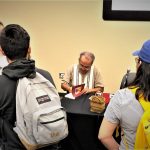