Even though Science Be Dammed was officially released in late November, buzz about the University of Arizona Press book grew months before its pages were printed. After all, in this age of climate catastrophe and growing discussions around water resources throughout the country, a book about how Colorado River policy makers ignored science in favor of growth offers a glimpse of reality folks often suspected was true. The book also offers a path forward, providing a new way to look at allocation and water policy.

The writers, Eric Kuhn and John Fleck, are also getting in front of new policy makers with their book in hand at regional conferences, meetings, and doing interviews on the book. Both authors bring important experience to share–Kuhn worked for the Colorado River Water District for more than four decades; while Fleck, a longtime journalism covering water, is now an academic with the University of New Mexico’s Water Resources Program.

Besides getting on two great seasonal reads lists from Outside Magazine and The Revelator, and doing a handful of radio interviews, here are few examples of recent media coverage for Science Be Dammed:

Naveena Sadasivam from independent news outlet Grist, recently wrote a story with a Q&A interview with Kuhn and Fleck.

In 1916, six years before the Colorado River Compact was signed, Eugene Clyde LaRue, a young hydrologist with the U.S. Geological Survey, concluded that the Colorado River’s supplies were “not sufficient to irrigate all the irrigable lands lying within the basin.” Other hydrologists at the agency and researchers studying the issue came to the same conclusion. Alas, their warnings were not heeded.

I caught up with Fleck and Kuhn to learn why LaRue and others were ignored and what history can teach us about the decisions being made on the river today. This interview has been condensed and edited for clarity.

Q. When did you both realize that the conventional wisdom about the framers of Colorado River law using bad data was incorrect? Was there an “aha” moment?

A. Fleck: The “aha” moment for me was when I found the transcripts of LaRue’s 1925 congressional testimony, when he said, as clear as could be, that there’s not enough water for this thing they were trying to do. It erased any doubt I had that the reports were too technical and people didn’t really understand them. He was there testifying before Congress, and they just chose to ignore it. None of the senators followed up. They were clearly choosing to willfully ignore what LaRue was saying.

Kuhn: He wasn’t alone. There was USGS hydrologist Herman Stabler, an engineering professor from the University of Arizona, and a very high-level commission appointed by Congress, headed by a famous Army Corps of Engineers’ lieutenant general, and they came to the same conclusion. The surprise to me was how widespread the information was among the experts at the time. There was never even enough water in the system for what we wanted to do before climate change became an issue.

This week, the Tucson Weekly featured Science Be Dammed on their cover, with an author interviews and an excerpt:

Kuhn and Fleck argue in the book that the greatest failure of river management institutions in the 20th century is a lack of plan B in the face of less water. And of course, there is now less water.

“Climate change and many other factors have basically said that there’s no stationarity in the river; we can’t use the last 100 years to predict what’s going to happen in the next 100 years,” Kuhn said. “Now that every drop of water in the river is used, the cushion is gone. And I think that’s one of the messages: You can’t rely on future generations to fix a mess.”

Even if the compact’s framers hadn’t selected the “rosiest scenario possible,” the Southwest’s current 19-year drought would still cause tightening for the Colorado River’s allocations. This has led to updated rules around water use, such as Arizona’s recently ratified Drought Contingency Plan.

Fleck and Kuhn are not without hope, however. Not only is science advancing to offer new methods of water conservation, but the populations of many Southwestern cities are living more sustainably as well. For instance, Tucson’s water demand has continually lowered in the past two decades, despite an increase in population. In 2000, Tucson used 133,000 acre feet of water annually; in 2017, it was 110,000; and 104,000 is projected for 2025. 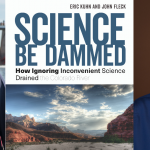