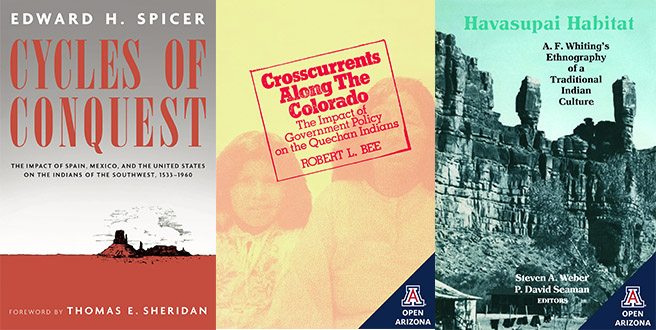 We are pleased to announce the availability of three important new contributions to Open Arizona. Selected by an advisory board of scholars and community members, the new additions include Edward H. Spicer’s seminal work Cycles of Conquest; Robert L. Bee’s Crosscurrents Along the Colorado; and Whiting, Weber, and Seaman’s Havasupai Habitat.

Open Arizona is a collection of open-access University of Arizona Press titles made available through the support of the Andrew W. Mellon Foundation. The scholarship, histories, and approaches in the selected titles emphasize the relevance of the southwestern United States to understanding contemporary American life.

Cycles of Conquest
By Edward Spicer

After more than fifty years, Cycles of Conquest is still one of the best syntheses of more than four centuries of conquest, colonization, and resistance ever published. Thomas E. Sheridan writes in the new foreword commissioned for this special edition that the book is “monumental in scope and magisterial in presentation.”

Crosscurrents Along the Colorado
By Robert L. Bee

This intriguing book, original published in 1981, considers the Quechans as a case history of the frequent discrepancy between benevolently phrased national intention and exploitative local action.

Havasupai Habitat
By A. F. Whiting
Edited by Steven A. Weber and P. David Seaman

Published in 1985, Havasupai Habitat offers a rich ethnography on lifeways of the Havasupai people. 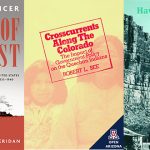