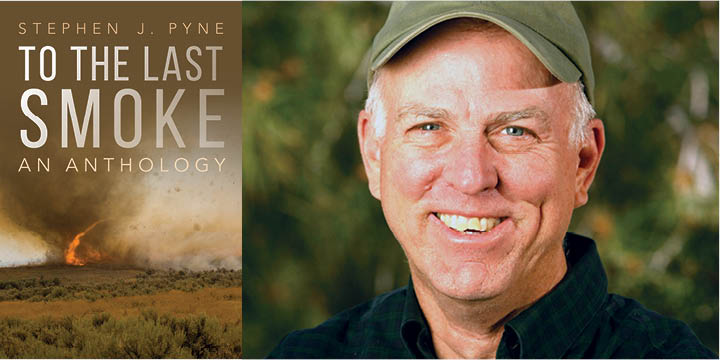 For more than a week, the Tucson community has watched the Bighorn Fire burn its way across the Santa Catalina Mountains. Many people have been ordered to evacuate their homes as firefighters from surrounding regions fight the blaze. As of today, the fire has burned 14,686 acres with 30 percent containment.

Since 2015, we’ve published the works of fire historian Stephen J. Pyne, starting with a narrative examination of fire in the United States Between Two Fires: A Fire History of Contemporary America. Next, we published a series of regional fire surveys. This spring, Pyne brought together the best of each regional study into the anthology To the Last Smoke, which offers a unique and sweeping view of the nation’s fire scene and serves as a punctuation mark to the series.

Pyne is an emeritus professor at Arizona State University. He is the author of more than 30 books, mostly on wildland fire and its history but also dealing with the history of places and exploration, including The Ice, How the Canyon Became Grand, and Voyager.

Below, read an excerpt from the “Southwest” section of Pyne’s new anthology:

“On September 18, 1909, a young Aldo Leopold, then a ranger with the U.S. Forest Service, shot two timber wolves in Arizona’s White Mountains. He noted the episode casually in a letter home. But the incident, like embers in an old campfire, glowed in his mind, and in April 1944 he wrote one of his most celebrated meditations, ‘Thinking Like a Mountain’, in which he described standing over the dying she-wolf and watching the ‘fierce green fire’ in her eyes die and wondered if shooting the wolf had helped unhinge the larger landscape. Too much emphasis on safety, he thought, was dangerous. He quoted Thoreau’s dictum, ‘In wildness is the salvation of the world.’

The essays, or more accurately moral epistle, became one of the founding documents of 20th-century American environmentalism. It helped make the wolf the living emblem of the wild, and wolf restoration a measure of ecological enlightenment. About 10 miles of Leopold’s kill site, Mexican gray wolves were reintroduced in 1998. But his insights also helped underwrite a campaign of nature protection that focused on the preservation of pristine lands. Leopold was the architect of America’s first ‘primitive area’, the Gila, located in an adjacent national forest, which subsequently became the inspiration for a National Wilderness Preservation System 40 years later. In 1984 the system acquired the 11,000-acre Bear Wallow Wilderness, about 10 miles as the crow flies southwest from where Leopold shot is wolf. Between them the three sites from a triangle of environmental thinking transformed into action— the deed into an idea, the emblem into a restored species, the wild into a legally gazetted preserve.

A century later a mammoth wildfire boiled out of the Bear Wallow Wilderness, blew over the wolf reintroduction site, and overran Leopold’s vantage point above the Black River. The Wallow fire, kindled by an untended campfire, burned 50 times as much land as the wilderness held. An idealistic green fire met an all-too-real red one.

The contrast almost overflows with symbolism, but two themes seem most useful. One speaks to nature protection, and that preserving the wild is perhaps not just a paradox but an example of a misguided urge toward safety, in this case the security of nature, not unlike Leopold’s shooting a wolf. ‘In those days we never heard of passing up a chance to kill a wolf.’ Fewer wolves meant more deer, and no wolves meant ‘a hunter’s paradise.’ So, too, it has seemed self-evident that removing the human presence would mean a healthier land, and no people would mean paradise.

The other theme is fire. At the time Leopold killed the green fire, he was also swatting out red ones. Fire control was among the most fundamental of ranger tasks; to ignore fire could be cause for dismissal. Interestingly, posters from the era even equated fire with wolves: the fire wolf running wild through reserves was a ravenous killer that needed to be hunted down and shot. Over time this belief, too, yielded to the realization that fire’s removal, like the wolf’s, could unravel ecosystems. The difference was that fire was renewed annually, if not through human artifice then through lightning (the American Southwest is North America’s epicenter for lightning fire). The spark is always there: if wind and fuel are aligned, fire can spread.

But the deeper story was that the sparks decreased and the fuel was stripped away. Lightning fires were attacked and distinguished at their origin. People quit setting tame fires to substitute for nature’s wild ones. And overgrazing slow-metabolized on a vast scale what fire had formerly fast-burned. Cattle and sheep cleaned out the country’s combustibles. Flame might kindle in the isolated snag; it could not easily spread. Over decades, however, the removal of predatory fire allowed a woody understory to flourish, akin to the metastasizing deer population that blew up after the wolves were extinguished. Both yielded a sick, impoverished landscape.

So a campaign to restore fire ran parallel to that for reinstating wolves. Their histories are oddly symmetrical. The population of neither wolf nor fire has reached its former levels, and the landscape teeters on a metastable ridgeline. The issue is that success requires not merely the presence of wolf and flame but a suitable habitat in which they can thrive. The power of fire resides in the power to propagate, and that sustaining setting was gone. Fire, however, had other properties wolves lacked, notably a capacity not simply to recycle but to transform. A single spark could transmute thousands of acres almost instantaneously.

On Memorial Day weekend, May 2011, flames returned. This time they came as feral fire. It was certainly not a tame fire— not a controlled burn or a prescribed one suitable for wildlands. Neither was it a truly natural fire; it started from a slovenly kept campfire and burned through decades of forests whose structure had been destabilized by logging, of grazing that had destroyed their capacity to carry surface fire, and of doctrines of fire exclusion that had prevented nature’s economy from brokering fuel and flame. The Wallow fire could no more behave as it would have in presettlement times than could a wolf pack dropped into a former hunting site now remade into a Phoenix shopping mall.

Probably fires had burned as widely in the past, but through long seasons in which they crept and swept as the mutable comings and goings of local weather allowed. Undoubtedly, in the past spring winds, underwritten by single-digit humidity, had blown flame through the canopies of mixed-conifer spruce and fir and left landscapes of white ash and sticks. But it is unlikely that earlier times had witnessed a similar combination of size and intensity. The Wallow burn was not what forest officers had in mind when they sought to reintroduce the ecological alchemy of free-burning flame.

If you would like to read more about fire in the Southwest, we are currently offering Stephen J. Pyne’s The Southwest as a free e-book through 6/25/2020. Use the code AZFIRE20 at checkout! 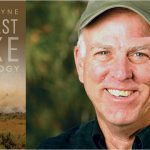