We recently asked several University of Arizona Press authors to recommend a book from the Press that makes for a good read, and beautiful literature. Enjoy!

We may not have baseball this year (fingers still crossed), but we do have Dodger Blue Will Fill Your Soul. Of course this collection is about more than baseball. Bryan Allen Fierro‘s debut is a series of searing tales set in the barrios of Los Angeles that was rightly recognized as being a testament to all of our shared humanity.

Melissa L. Sevigny’s Under Desert Skies: How Tucson Mapped the Way to the Moon and Planets

Summer evenings are for stargazing. And our desert skies make for some of the best seeing anywhere. Just ask any astronomer or backyard telescope enthusiast. You probably know one or two because Tucson is full of them. Chances are you’ve visited Kitt Peak National Observatory or the Mount Lemmon SkyCenter or the Whipple Observatory on Mount Hopkins, just a few of the telescope collections that dot the peaks of our sky islands.

Indeed, Tucson is the astronomy capital of the world. But we also have a long, fascinating history of planetary science. Melissa L. Sevigny’s 2016 book, Under Desert Skies: How Tucson Mapped the Way to the Moon and Planets, tells the stories of how space pioneers like Gerard Kuiper and Ewen Whitaker founded the UA’s Lunar and Planetary Lab (LPL) and made Tucson the epicenter of exploration of our solar system.

Want to know more about the Tulsa Race Massacre that’s been in the news recently? Tom Holm‘s novel provides a nuanced examination of this event and two others that happened nearly simultaneously: the Osage Oil Murders and Prohibition, through the actions of believable characters. This is the best work in print that addresses these issues which still have consequences nearly a century since they occurred.

With so little time, I pick cautiously the guests I invite to share my imagination. I want my VIP guests to tingle flesh and zing my body electric. I want them to stop me in my tracks to hear new contrapuntal melodies and to shiver with pleasure as I lick air that wraps anew words and images—actions and thoughts. I want them to peel back that thick glaze coating the surface of my mind. I want them to jumper-cable shock me out of Twitter bubbles and FB echo chambers. I want a lot. Today, I invite Carmen Giménez Smith and her exquisite Milk and Filth to share my soul.

I recommend Sara Sue Hoklotubbe‘s award winning Sadie Walela Mystery series. There are precious few Native mystery writers and it is refreshing indeed to read stories authored by writers who know the culture and the territory.

—Devon A. Mihesuah, author of The Roads of My Relations

Emmy Pérez’s, With the River on Our Face

Emmy Pérez’s With the River on Our Face, is more than a love letter to the Peoples and ecologies long nourished beyond the cut banks of the Rio Grande. This vital collection is a divining rod. With precise music in her language, Pérez is intentional and patient, and informed. With the River on Our Face is a meditation, border gravity pulling the reader to culturally fertile and voice sustaining, emerald waters. 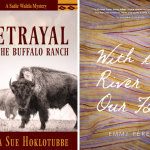