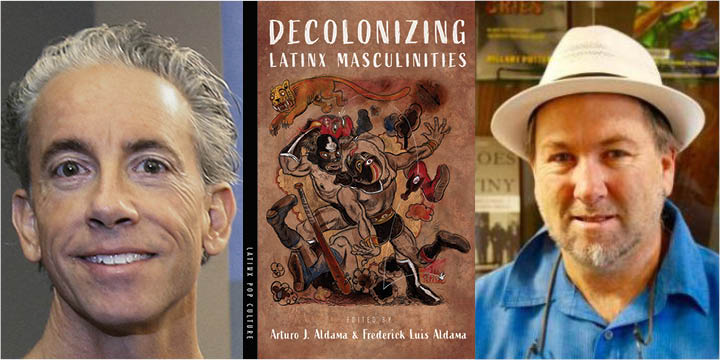 In Decolonizing Latinx Masculinities, eighteen contributors explore how legacies of colonization and capitalist exploitation and oppression have created toxic forms of masculinity that continue to suffocate the lives of Latinx people. And while the authors seek to identify all cultural phenomena that collectively create reductive, destructive, and toxic constructions of masculinity that traffic in misogyny and homophobia, they also uncover the many spaces—such as Xicanx-Indígena languages, resistant food cultures, music performances, and queer Latinx rodeo practices—where Latinx communities can and do exhale healing masculinities.

What inspired you to create this edited volume?

The short answer: It’s the right moment. Of course, there’s been much important work done already within different critical (street and ivory tower) spaces to trouble, overturn, and break from stagnant, stagnating, straightjacketing behaviors (thought and feeling systems), policies, and cultural imaginaries. In our introduction to the volume, we mention a whole slew of such powerfully transformative creators, writers, and activist-thinkers. Too many to list here.

We are both very inspired and transformed by Xicana, indigenous and women of color feminist thought and queer of color critique so we thought it is important to bring a decolonial gaze into the constructions and performance of Latinx masculinities.

By moment, we mean that there’s today un gran Latinx tsunami pushing up from seafloors with a hereto unimagined potent kinetic energy. Young gen Latinxs creator-scholars are leading the charge, modeling vital and vigorous twenty-first century decolonizing ontological and epistemological practices. It’s more than a moment. It’s a movement. The legion of extraordinary activist creator-scholars that make up Decolonizing Latinx Masculinities are its avantgarde.

What do you think the long-term implications of negative masculine stereotypes in the popular media—from fictional TV shows to political news coverage— are for Latinx youths?

From TV shows like Narcos and Borderforce and films such as Sicario to the Chief Executive Cheeto’s racist, sexist, and hetero-thuggish Tweets, mainstream media continues to give free license to retrograde social and economic policies. Arguably, as never before the mainstream media functions to justify Klansman-like terrorist actions against LGBTQ+ and Brown, Black, and Indigenous communities in this country. The mainstream media filled with images of Latinxs as a Brown horde threat that threatens White civilization justifies the intensification of violence and surveillance within our carceral state.  That results in the curtailing—no, the destruction—of the full flourishing of complex, non-binaristic Latinx thought, feeling, and action systems.  That allow us to be in ways far more expansive than erstwhile concepts of gender and sexuality captured.

This said, and as the work in this volume attests, we’re not sitting around on our hands. We never have. We never will. We’re using our pens as our machetes. We continue to work hard to resist the onslaught of destructive media, wrenching tight tourniquets to stop culturacidal hemorrhages.

The transformative work seen by the scholar-creator activists in this volume are testament to this fact. They not only re-act. They open new spaces for us to inhale multispectrumed identities and exhale multifarious experiences. They clear new affirming paths that invite us to move powerfully forward.

With Decolonizing Latinx Masculinities we hope that millennial Latinx subjects will begin to truly question and decolonize the practices of toxic masculinities and learn to love each other and others without the straitjackets of misogyny and homophobic/transphobic violence(s) perpetuated by the capitalist media congloms.

Do you think the young adult literature, shows, films, podcasts, and music of today are opening the conversation for healthier masculinities, or do you think all of these industries still have a long way to go?

Everywhere we turn, Latinx creators are opening eyes to the resplendent spectrum of liberatory modes that we exist—and can exist. We think readily of queer author Alex Sanchez’s breathtaking coming of age and out Aqualad superhero graphic novel for DC. (See Fred’s “Anatomy of a Panel with Alex Sanchez”.). We think of Latinx-helmed TV shows like the rebooted One Day at a Time, Vida, and Gentefied that variously trouble simplistic and stifling ways of being in terms of language, culture, gender and sexuality. (See Fred’s “Love Victor: Brown Queer Teen Tvlandia Watershed; or Hollywood Brown Flavored Bubblegum”.) We think of the vital new audioscapes created by new gen nonbinary Latinx musicians such as Dominican Latinx Rubby and Afro-Boricua Nitty Scott. It’s in these Latinx-grown cultural spaces that we see the pop happening when it comes to waking the world to the vibrant, multispectrumed non-binary ways that we can and do feel, think and perceive in the world.

Recognizing that many aspects of toxic masculinity are rooted in colonialism, how do you think communities should work toward more Indigenous ways of thinking about and performing gender?

Unfortunately, the colonial legacy is still with us. From generation to generation, we’ve passed down a colonial mentality; we’ve passed down centuries of destructive and restrictive ways of thinking and feeling as colonized peoples. The result: we Latinxs act from fear—a fear that divides us from one another—that atomizes us—and that ultimately destroys our families and communities. It’s hate that we see rear its ugly head when a family member fires pejorative bullets at us like puto, maricón, chavala, puta, crybaby, lloroncito, bitch, pussy, niñita. Decolonizing Latinx Masculinities offers the many different ways we can begin to unlearn this hate and fear. It’s the work of those who have come before us and new gen Latinx scholar-creator activists like those in this volume that can and do show us how to decolonize minds,  bodies—spirits. They can and do invite us to struggle free from those straightjackets of binary and polarized models of existence. They welcome us into new dynamic and multispectrumed modes of existing as genders, sexualities—as expansively loving masculinities.

We have our individual projects, of course. Fred’s working on the animation adaptation of his debut kid’s lit book, The Adventures of Chupacabra Charlie and continues his work Latinx-diversifying the otherwise white space of comics studies. As Chair of Ethnic Studies, Arturo is focused on doing outreach to the Latinx community through the funded Latinx history projects and continue work with the lyripeutics project to bring decolonial spoken word and hip hop pedagogy to Latinx and other youth of color who are surviving the school to prison pipeline.

We love working together, not only on editing volumes such as Decolonizing Latinx Masculinities but also the work of shepherding new visions and voices through our Latinx Pop Culture book series with you all, the University of Arizona Press. We have some extraordinary books to look forward to seeing on library bookshelves, classroom desks, and ruffled up in backpacks and back-pockets, so be sure to keep an eye out for them in the future.

Arturo J. Aldama is an associate professor and chair of Ethnic Studies at the University of Colorado, Boulder, and affiliate faculty in Gender and Women’s Studies. He received his doctorate in ethnic studies from University of California, Berkeley, in 1996. He is co-editor of the University of Arizona Press’s series Latinx Pop Culture. He is the author of Disrupting Savagism: Intersecting Chicanalo, Mexican Immigrant and Native American Struggles for Representation and author and curator of Moments in Mexican American History: Racism and Resistance, a forty-panel traveling exhibit on the histories of racism, violence, and activism in Mexican American and Chicanx communities of the Southwest. He is co-editor of numerous volumes, including Comparative lndigeneities of the Américas: Toward a Hemispheric Approach.

Frederick Luis Aldama is University Distinguished Professor, Arts & Humanities Distinguished Professor of English, University Distinguished Scholar, and Alumni Distinguished Teacher at The Ohio State University. He is the 2018 recipient of the Rodica C. Botoman Award for Distinguished Teaching and Mentoring and the Susan M. Hartmann Mentoring and Leadership Award. He is the award-winning author, co-author, and editor of more than forty books. In 2018 his Latinx Superheroes in Mainstream Comics won the International Latino Book Award and the Eisner Award for Best Scholarly Work. He is editor and co-editor of eight academic press book series, including Latinx Pop Culture, as well as editor of Latinographix, a trade press series that publishes Latinx graphic fiction and nonfiction. His other University of Arizona Press books include Latinx Ciné in the Twenty-First Century, Long Stories Cut Short, and Reel Latinxs. 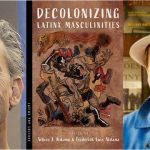