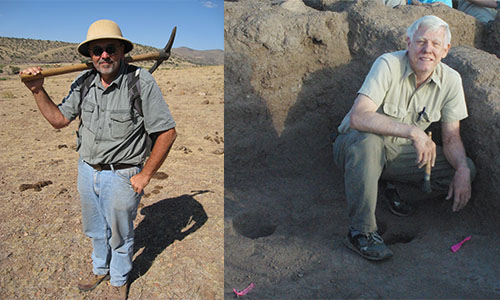 By Paul Minnis and Michael Whalen

Our research in northwestern Chihuahua focused on the area around the famous and important site of Paquimé (or Casas Grandes), which was most influential during the Medio Period, AD 1200–1450 (give or take a few decades either way). Over the past two decades, we directed multiple field projects in the region. At first, we conducted surveys, systematically walking over an area to record whatever archaeological remains were observable. Then we transitioned to the excavation of a range of sites in an attempt to understand how the Paquimé-dominated society was organized and when it dated to, among other questions.

One of the most important sites we studied—Site 204—is located west of Paquimé in a tributary drainage. We selected this site because it was one of the two largest Medio Period sites near Paquimé, so we could compare it with the small villages we studied at one end of a continuum of size and the premier and largest site, Paquimé, at the other extreme.

Image 1a: Site 204 is located in a small valley that also has a large number of Medio Period villages. The atalaya is a feature on a hilltop that probably was a shrine and communication point visible from Cerro Moctezuma, which is just west of Paquimé. Cerro Moctezuma was probably one of the major shrines in the local area.

Image 1b: Site 204 has three “mounds” that are the remains of adobe room blocks that have decayed over the centuries into piles of dirt. There are three mounds for a total of about two hundred rooms. In addition, this site has two large ritual roasting pits and a ball court. Like nearly all Medio Period sites, the room blocks have been severely looted.

Image 2: The first day of excavation is always exciting and, in a way, terrifying. Questions go through your mind: What is below the ground, what will you find, or did you start in the best place to excavate?

Image 3a & 3b: Excavating using a precise grid system, you slowly find walls and outline rooms. Then you remove the fill in the room in layers, carefully screening the dirt so as not to miss small artifacts. Unfortunately, much of each room has been looted, which mixes the artifacts. Finally, there’s the reward: the excavation of the floor and its features such as hearths and pits. You are not actually done after excavating, mapping, and photographing the rooms: the area below the room is excavated to look for evidence of earlier occupation.

Image 3c: Ball courts were important locations of community events. Site 204 has one ball court that had been dug into the ground forming an I-shape. We also excavated a trench across the ball court.

Image 3d: Not all archaeological features are visually interesting or obvious. The faint lines of rocks are rock walls (trincheras) that form small farming plots. The hillside above Site 204 is filled with these features, as are many hillslopes in the Casas Grandes region. While most were farmed by small families, a few seem to have been cacique or chief fields, controlled by leaders and worked by the populous.

Image 4a: Although not common, we excavated several stairs at the six sites we studied.

Image 4b: T-shaped doorways are common and likely had important ritual significance. This example is of a T-shaped doorway that was filled to block it off as part of the room’s renovation.

Image 4c: Most rooms at sites in the Casas Grandes region appear to have been used as domestic space where people lived their daily lives. We did excavate some that appear to have had ritual use. This room originally had two columns, and some are artifacts. As you can see, the open space between the columns were closed with a later wall. Also present is a T-shaped door at the far end of the room. The many asymmetrical holes in the floor are the bottom of looters’ holes, an ever-present factor in studying Medio Period sites.

Image 4d: The value of archaeological remains are not determined by their aesthetic appeal or rarity. These charred corn cobs are not especially beautiful, but they help tell us about how the people lived. There is evidence that important community events that drew people from throughout the Casas Grandes area required massive amount of food for feasts.

Image 4e: Figures and effigies are common from the Casas Grandes region. While this artifact obviously is a human head, we don’t know what it meant to the ancient peoples of the region.

Image 4f: One of the most remarkable activities was the raising of macaws. This is the only macaw skeleton we found in our excavations. It was in a subfloor pit, probably an offering dedicating the room.

Image 4 G: This pendant may be of a macaw, a parrot, or another bird.

Image 4h: Turquoise is quite rare in Casas Grandes sites, compared to other sites in the U.S. Southwest and northwestern Mexico.

Image 4i: This is a reconstructed pot. Although most attention is on the beautiful and iconic Ramos Polychrome ceramic, most clay vessels were plain like this one.

Image 5: Survey and excavation are the best known parts of archaeological research, but at least an equal amount of time is spent in the laboratory analyzing the materials removed during fieldwork.

Image 6: One wonderful outcome of being on an archaeological project is that you often develop friendships that last a lifetime . . . literally. This is especially delightful among crews from different countries or regions within a country. Here, one of our crews with members from Mexico, the Unites States, and Canada enjoy a day off visiting the famous cliff dwelling site, Cueva de la Olla, with it enormous granary located in the mountains west of Paquimé.

The Prehispanic Ethnobotany of Paquimé and Its Neighbors is the first large-scale investigation of the prehispanic ethnobotany of this important ancient site and its neighbors. Paul Minnis and Michael Whalen examine ethnobotanical relationships during Medio Period, AD 1200–1450, when Paquimé was at its most influential. Based on two decades of archaeological research, this book examines uses of plants for food, farming strategies, wood use, and anthropogenic ecology. The authors show that the relationships between plants and people are complex, interdependent, and reciprocal. This volume documents ethnobotanical relationships and shows their importance to the development of the Paquimé polity.

Paul E. Minnis is a professor emeritus of anthropology at the University of Oklahoma. He is the author or editor of twelve books and numerous articles. He has been president of the Society of Ethnobiology and treasurer and press editor for the Society for American Archaeology, and he is co-founder of the Southwest Symposium.

Michael E. Whalen is a professor emeritus in the Department of Anthropology at the University of Tulsa. He has published a series of books, monographs, chapters, and journal articles on Oaxaca, western Texas, and northwestern Chihuahua. His research has been supported by the National Science Foundation and the National Geographic Society.

All images in the post are copyright the authors. 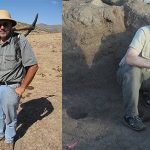