When Christopher Cokinos isn’t talking about his love of poetry that celebrates spaceflight, the poet and author shares his interest in space sciences.

The co-editor of Beyond Earth’s Edge: The Poetry of Spaceflight, Cokinos recently examined NASA’s discovery of water on the moon in Sky News.

The discovery suggests a greater distribution of water on the Moon, an environment that astronomers in centuries past thought might have surface water but Apollo-era science suggested was bone dry. Since then, new laboratory techniques have cracked open previously-unstudied Apollo samples and found water molecules. Meanwhile, missions to the Moon over the past three decades found evidence of lunar water ice in permanently shadowed regions of the Moon, clustered around the poles.

For The Space Review, Cokinos makes an argument for the next NASA lunar mission to head to the moon’s south pole, and not follow in the footsteps of the Apollo missions.

In any case, if we can’t get to the pole on Artemis 3, go forward to a new location and don’t return to an Apollo site—not yet. Lunar sustainability can’t indulge in the appearance of expensive nostalgia that could risk turning off shaky public support. 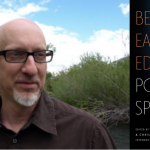