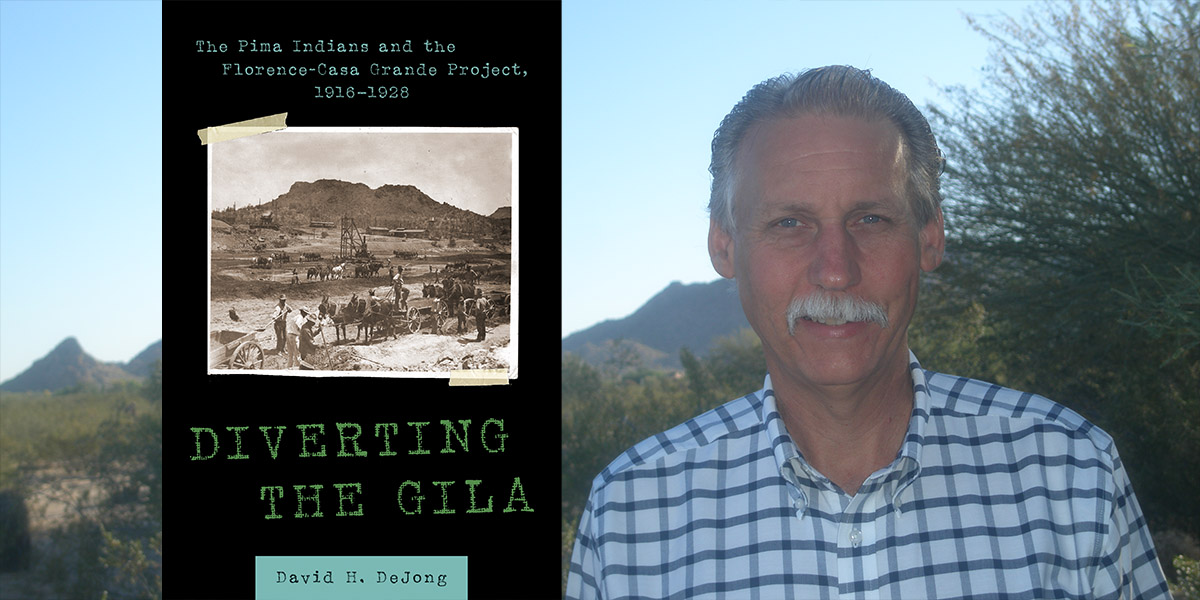 In the late nineteenth and early twentieth centuries, Americans assumed the land and water resources of the West were endless. Water was as vital to newcomers to Arizona’s Florence and Casa Grande valleys as it had always been to the Pima Indians, who had been successfully growing crops along the Gila River for generations when the white settlers moved in. In Diverting the Gila: The Pima Indians the Florence-Casa Grande Project, 1916-1928 author David DeJong explores the complex web of tension, distrust, and political maneuvering to divide and divert the scarce waters of the Gila River.

Today the author shares photos and extended captions that help highlight the history in Diverting the Gila.

New England Grading Machine. In 1912 the Casa Grande Valley Water Users Association (CGVWUA) purchased a New England Grading Machine for the purpose of excavating the channel of the Casa Grande Canal (present-day Florence-Casa Grande Canal). The CGVWUA was formed in 1911 to construct a canal parallel and upstream to the Florence Canal to convey water to the small agricultural town of Casa Grande. The task was daunting and the CGVWUA managed to construct but half of the canal by 1915. The project failed to be completed and the canal was purchased by the United States for $50,000 and incorporated into the new Indian Irrigation Service constructed and operated Florence-Casa Grande Project (FCGP) to convey water to the Gila River Indian Community and non-tribal growers in the Florence-Casa Grande Valley.

The men of the Florence-Casa Grande Project. The FCGP was authorized in May 1916 but construction did not begin until 1921. In the post-World War One years, the Arizona economy slowed, leaving many people out of work. Local towns encouraged the Indian Service to begin construction as soon as possible to provide employment, but because a landowners’ agreement took time to negotiate, construction was delayed. When work commenced in January 1921, Charles Olberg and his Indian Service engineers hired over 600 employees to construct the diversion dam. Most of the workers were unskilled men earning $2.50 a day while skilled workers were paid $3.00 to $5.00 per day. Nearly all of these men are lost to antiquity but the project they constructed continues to serve its purpose today.

Entire families lived at the diversion dam site. While most of the men who worked at the Florence diversion dam were single, many brought their families. The construction camp at the diversion dam (present-day Ashurst Hayden Diversion Dam) became a small city, complete with a water and sewer system, a telegram and post office, fire department, dry-goods store and a school. Most of the facilities were simple shade structure or tents, with many of the men sleeping outside under ramadas. The engineers and other skilled workers live in more permanent facilities, including chief engineer Charles Olberg who lived in a three-room cottage on site. Olberg’s wife Eloise was the only death, as she died of a stroke in October 1921.

Fresno scrapers. Most of the earthwork at the diversion dam was conducted by four-team Fresno scrapers. Men providing their own horses were paid $20 per month. Scores of locals hired out their wagons (paid $10 to $15 per month) and teams to move rock, cement and other supplies brought in by the Arizona Eastern Railroad, seen on the north side of the Gila River. Challenges with moving cement and dynamite from the railhead on the north side of the river to the south side occurred when the river flooded, as it did on July 4, 1921. A pedestrian bridge was constructed over the river for men but supplies from the north side remained stranded until the river flow diminished.

Intake Gates at the diversion dam. The dam across the river was an East Indian Weir that “floated” on the sandy surface of the riverbed. The nine intake gates (right on photo) were located on the south side of the river and were designed to skim water from the river while allowing sediment to go downstream. The design worked poorly as the front of the intake gates was continually choked with sediment. Construction of the vertical wall leading to the top of the inlet gates and the dam tenders house to the south (left side of photo) was without any safety features. Concrete mixed on the north side of the river was conveyed across the river on a narrow gauge trestle with three-quarter cubic yard cars pulled by “dinkies,” or small Ford motor-powered engines. Amazingly, no one was injured during the pouring of the cement walls.

Completed Florence (Ashurst-Hayden) Diversion Dam. The diversion dam consists of an upstream articulated slab of concrete 142 feet wide and 396 feet long and two to five feet thick. Then there was the “floating” weir 396 feet across the river with a downstream 70 feet wide by 396 feet long concrete slab and talus rock blanket to protect the structure from eroding. Over six hundred men poured the slab working in three shifts 24-hours a day, completing it in twelve days. A gasoline engine provided the power to operate the hydraulic gates inside the inlet structure at the center of the photo. A small building behind the dam housed the engine and supplies. A dam tender’s house was later constructed on the hill to the right of the engine room.

The Dindinger family. Paul Dindinger was the dam tender at the Florence Diversion Dam. He and his wife Olga resided at the dam until the late 1940s. Grandsons Keith (5) and Lee (1) were born in Florence and grew up around the dam and headworks of the Florence-Casa Grande Canal.  Keith now resides in San Diego and travels to the site regularly. The dam tenders house was abandoned in the early 1980s. It was burned to the ground in 2004. Ashurst-Hayden Diversion Dam was rehabilitated under the authority of the Arizona Water Settlements Act of 2004. While no longer requiring a dam tender on site, the dam is still an integral part of the San Carlos Irrigation Project.

David H. DeJong holds MA and PhD degrees in American Indian policy studies from the University of Arizona. He has published seven books, including Stealing the Gila, as well as dozens of articles about federal Indian policy. DeJong is director of the Pima-Maricopa Irrigation Project, a construction project funded by the U.S. Bureau of Reclamation and designed to deliver water—from the Central Arizona Project, the Gila River, and other sources—to the Gila River Indian Reservation. 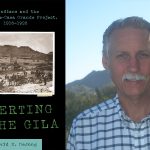