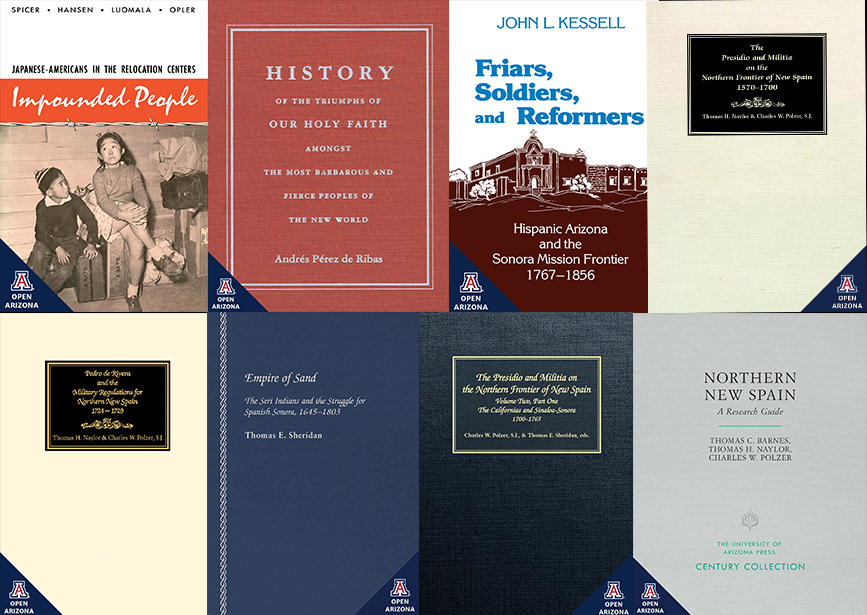 Nine new open access titles are now available in Open Arizona, funded by the Andrew W. Mellon Foundation. Selected by an advisory board of scholars and community members, the new additions include Empire of Sand, Friars Soldiers and Reformers, and Impounded Peoples.

The new books include:

Empire of Sand
The Seri Indians and the Struggle for Spanish Sonora, 1645-1803
Thomas E. Sheridan
This is a documentary history of Spanish attempts to convert, control, and ultimately annihilate the Seris. These papers of religious, military, and government officials attest to the Seris’ resilience in the face of numerous Spanish attempts to conquer them and remove them from their lands. Thomas Sheridan’s introduction puts the documents in perspective and clarify their significance. In a superb analysis of contact history, Sheridan shows through these documents that Spaniards and Seris understood one another well, and it was their inability to tolerate each other’s radically different societies and cultures that led to endless conflict. By skillfully weaving the documents into a coherent narrative of Spanish-Seri interaction, he has produced a compelling account of empire and resistance that speaks to anthropologists, historians, and all readers who take heart in stories of resistance to oppression.

History of the Triumphs of Our Holy Faith amongst the Most Barbarous and Fierce Peoples of the New World
Andrés Pérez de Ribas
Contributors: Daniel T. Reff, Maureen Ahern, and Richard K. Danford
Considered by historian Herbert E. Bolton to be one of the greatest books ever written in the West, Andrés Pérez de Ribas’s history of the Jesuit missions provides unusual insight into Spanish and Indian relations during the colonial period in Northern New Spain. First published in Madrid in 1645, it traces the history of the missions from 1591 to 1643 and includes letters from Jesuit annual reports and other correspondence, much of which has never been found or cataloged in historical archives. Daniel T. Reff, Maureen Ahern, and Richard K. Danford have prepared the first complete, scholarly, and fully annotated edition of this important work in English.

Impounded People
Japanese-Americans in the Relocation Centers
Edward H. Spicer, Asael T. Hansen, Katherine Luomala, and Marvin K. Opler
This final report of the War Relocation Authority, written in 1946 describes the growth and changes in the community life and how attitudes of Japanese-American relocatees and WRA administrators evolved, adjusted, and affected one another on political, social, and psychological levels.

Northern New Spain
A Research Guide
Thomas C. Barnes, Thomas H. Naylor, and Charles W. Polzer
This research guide was first concieved to fulfill multiple needs of the research team of the Documentary Relations of the Southwest (DRSW) project at the Arizona State Museum. In performing research tasks, it became evident that reference material was scattered throughout scores of books and monographs. A single complete source book was simply not available. Hence, the editors of the DRSW project compiled this guide. The territory under study comprises all of northern Mexico in colonial times.

Pedro de Rivera and the Military Regulations for Northern New Spain, 1724-1729
A Documentary History, Volume I, 1570-1700
Edited by Thomas H. Naylor and Charles W. Polzer
Philip V ordered an inspection of the presidios in the northern provinces, which resulted in the reglamento of 1729. The study was done and documented by Pedro de Rivera Villalon. Includes Rivera’s report to the Viceroy of New Spain, the Reglamento of Havana , the inspection, Alvarez Barreiro’s map and descriptions. The documents are presented in their original Spanish and in translation, provide a detailed background by which modern scholars can better assess the status and role of Spain’s military outposts

The Presidio and Militia on the Northern Frontier of New Spain
A Documentary History, Volume I, 1570-1700
Edited by Thomas H. Naylor and Charles W. Polzer
Reports, orders, journals, and letters of military officials trace frontier history through the Chicimeca War and Peace (1576-1606), early rebellions in the Sierra Madre (1601-1618), mid-century challenges and realignment (1640-1660), and northern rebellions and new presidios (1681-1695).

The Presidio and Militia on the Northern Frontier of New Spain
A Documentary History, Volume Two, Part One: The Californias and Sinaloa-Sonora, 1700-1765
Edited by Charles W. Polzer and Thomas E. Sheridan
The two-part second volume looks at the Spanish expansion as occurring in four north-south corridors that carried the main components of social and political activity. Divided geographically, materials in this book (part 1) relate to the two westernmost corridors. Covering Sinaloa and Sonora, the mainland of the west coast of New Spain, records in the book reveal how the Sinaloa coastal forces differed from those in the interior and how they were depended upon for protection in the northern expansion, both civil and missionary. Because documents on the presidios in northern New Spain are vast in number and varied in content, these selections are meant to provide for the reader or researcher a framework around which more elaborate studies might be constructed.

The Presidio and Militia on the Northern Frontier of New Spain
A Documentary History, Volume Two, Part Two: The Central Corridor and the Texas Corridor, 1700-1765
Edited by Diana Hadley, Thomas H. Naylor, and Mardith K. Schuetz-Miller
Joining an acclaimed multivolume work funded by the National Historical Publications and Records Commission, this volume stand alone in their translation and publication of a wide variety of documents that describe the Spanish exploration and conquest of what is now the southwestern United States and northern Mexico. The presidial system of northern New Spain’s Central and Texas Corridor was an evolving institution used for exploration, military presence and defense against foreign powers, local militia duty, mission support, personal service, and penal obligations. The new volume, which covers parts of what is now Texas, New Mexico, and Mexico, includes letters, diaries, judicial papers, military reports, and interrogations. Difficult for researchers to access and sometimes to decipher, the records are presented in Spanish and in English translation, annotated and introduced by the volume editors. 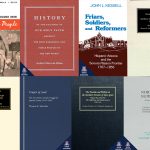