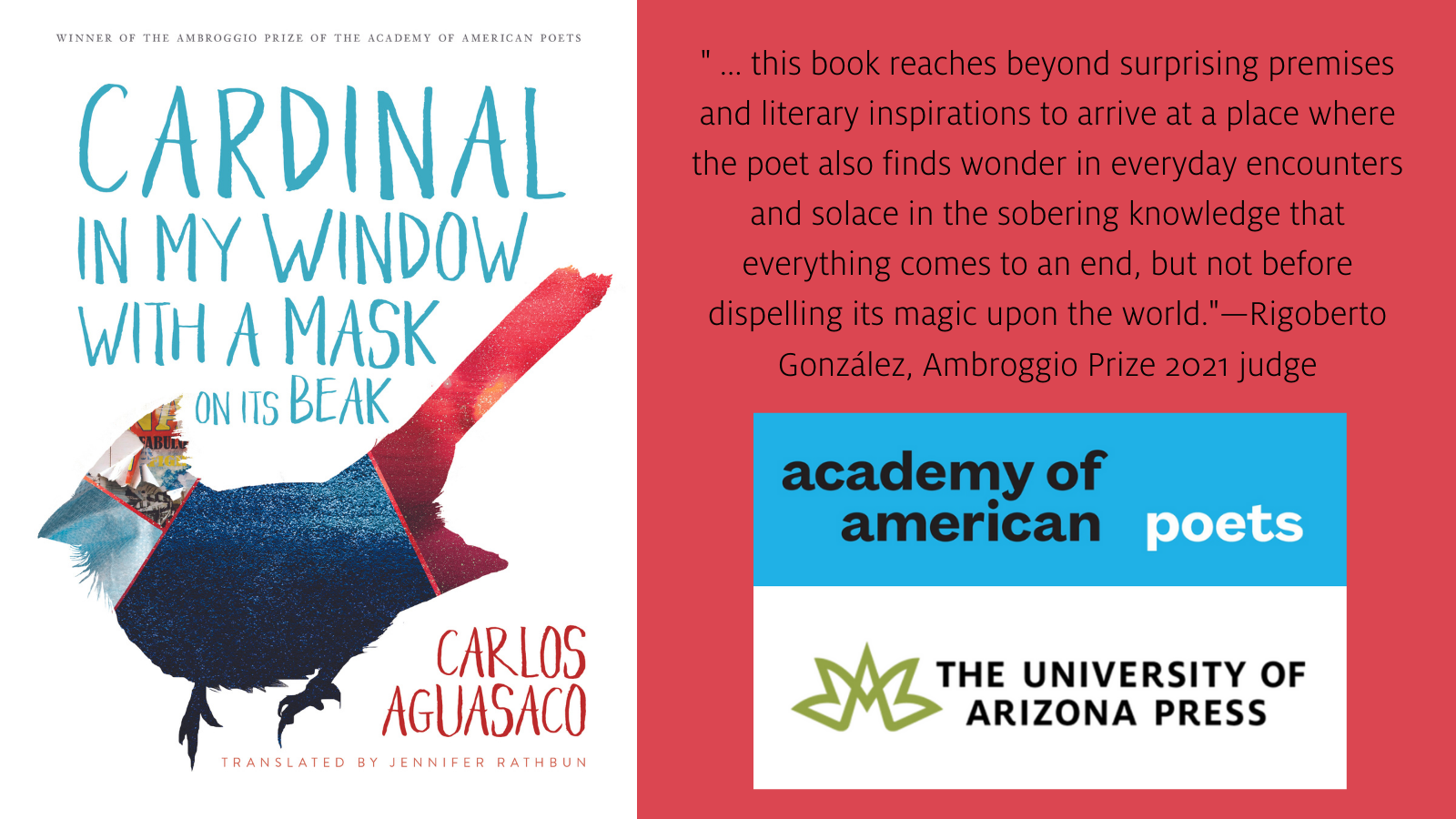 The Academy of American Poets announced today the winner of the Ambroggio Prize 2021, Carlos Aguasaco’s Cardenal en mi ventana con una máscara en el pico / Cardinal in My Window with a Mask on its Beak, translated by Jennifer Rathbun.

The Ambroggio Prize is a $1,000 publication prize given for a book-length poetry manuscript originally written in Spanish and with an English translation. The winning manuscript is published by the University of Arizona Press. Established in 2017, the Ambroggio Prize is the only annual award of its kind in the United States that honors American poets whose first language is Spanish. This year’s judge was Rigoberto González.

Carlos Aguasaco is the Professor of Latin American Cultural Studies and Chair of the Department of Interdisciplinary Arts & Sciences at the City College of the City University of New York (CUNY). He has edited eleven literary anthologies and published seven books of poems, most recently The New York City Subway Poems (Ashland Poetry Press, 2020). He has also published a short novel and an academic study of Latin America’s prime superhero, El Chapulín Colorado. He is the editor of Transatlantic Gazes: Studies on the Historical Links between Spain and North America (IF-UAH, 2018). Carlos is the founder and director of Artepoetica Press (artepoetica.com). He is also director of The Americas Poetry Festival of New York (poetryny.com) and coordinator of The Americas Film Festival of New York (taffny.com). His poems have been translated into English, French, Portuguese, Romanian, Galician, and Arabic.

Jennifer Rathbun is a Spanish Professor and Chair of the Department of Modern Languages and Classics at Ball State University. She’s published fourteen books of poetry in translation by Hispanic authors such as Alberto Blanco, Minerva Margarita Villarreal, Fernando Carrera and Juan Armando Rojas Joo; two anthologies of poetry denouncing femicide along the US-Mexico border; and the poetry collection El libro de las traiciones / The Book of Betrayals (Artepoetica Press, 2021). Rathbun completed her Ph.D. at the University of Arizona in Spanish, specializing in contemporary Latin American Literature. She’s a member of The American Literary Translators Association and she’s the Associate Editor of Ashland Poetry Press.

About Aguasaco’s winning manuscript, judge Rigoberto González said: “Cardenal en mi ventana con una máscara en el pico / Cardinal in My Window with a Mask on its Beak takes the reader on a journey through the surreal and the melancholic, to inventive scenarios like an encounter between Stein and Vallejo going to the movies, to the heartbreaking stories of sideshow attractions where bodies are stripped of their humanity. Yet this book reaches beyond surprising premises and literary inspirations to arrive at a place where the poet also finds wonder in everyday encounters and solace in the sobering knowledge that everything comes to an end, but not before dispelling its magic upon the world: like that red bird mirroring the masked face during the pandemic, like the arresting language of the poet that will eventually succumb to silence. Each poem in this exquisite collection brings a startling (and necessary) revelation about our aches, follies, and mortality, to light.” 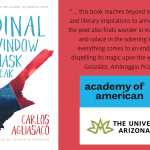