Poet Santee Frazier opened the University of Massachusetts Amherst visiting writers series, reflecting on his work and reading from his two collections published with the University of Arizona Press—Aurum and Dark Thirty.

From The Massachusetts Daily Collegian:

“As Frazier took the stage, he explained his decision to have his poems projected behind him. While this initially was done to accommodate Zoom events, Frazier explained that it allowed him to preserve the “visual art” of poetry while reading to the crowd.

Frazier reflected on the three distinct aspects that he explores in his writing. Frazier writes poems based on rituals, showcased in his collection Aurum, whereas some poems he finds himself “compelled to write.” Another avenue he seeks to explore is through the recurring character Mangled Creek Bed, the embodiment of Native American struggles and experiences in the Southwestern United States.” 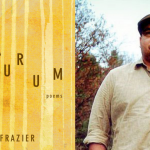