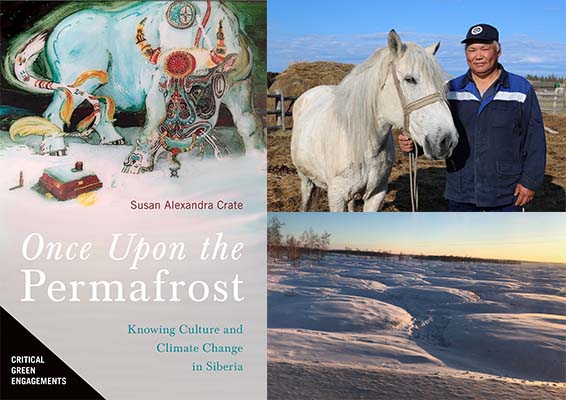 Susan Alexandra Crate has conducted ethnographic research with Viliui Sakha communities of northeastern Siberia, Russia since 1991. Her new book, Once upon the Permafrost, is a longitudinal climate ethnography that explains how her collaborators are affected by and adapting to climate change in the context of their extreme climate. Sakha’s Turkic ancestors migrated north to their present home over 500 years ago and adapted a horse and cattle subsistence to a climate that is characterized by a 100 degree Celsius temperature fluctuation (-60 to +40). They did so by holding their cows in barns nine months of the year and harvesting copious amounts of hay for fodder in the brief sweltering summer. Their adaptation is contingent upon their cosmology that ascertains everything in the world has sentience. This historical belief is also the foundation of the Indigenous knowledge system that informs their adaptation.

Today, Crate shares some notes from her time in northeastern Siberia.

Figure 1: Part of Crate’s investigation involved documenting life histories of individuals who had a certain specialty that privileged them a deeper understanding of how climate change was coming into and affecting their extreme environment. One of those life histories focuses on sylgyhyt (horse breeder) Valerian Yegorovich Afanaseyev, seen here with one of his two riding horses. Valerian’s mantra, ‘Snow is horses’ home’ exemplifies how Sakha horses need a specific climate regime that will deliver the right amount of snow and temperature conditions that allow them to ‘graze’ for fodder under the snow throughout the winter. “They are to work and dig. They need 30-40 cm of snow so they don’t freeze. If it is less than that, they can’t work and so they start going from place to place and they get thin. In short, Khaar sylgy jiete (Snow is horses’ home).” Climate change has disrupted that consistent cycle and horses can no longer prosper. Picture: Valerian Yegorovich Afanaseyev with one of his two riding horses May 21, 2019. Photo by author.

Figure 2: “Since 2005 when inhabitants first began talking about how the winters were not as cold, summers not as hot, rain was ‘wrong’, and other aspects I knew were related to climate change, I sought out a natural scientist to collaborate with to bring an understanding of the physical changes into my work. Since that time I have worked with Alexander Fedorov, permafrost scientist at the Melnikov permafrost Institute, Yakutsk. We conducted ‘knowledge exchanges’ in 2010, working in eight communities in the Viliui regions, to solicit local testimonies of change in the environment and appropriate Alexander’s scientific information for community use. We continue to work to this day, proposing other such knowledge exchange activities in other regions and finding ways to educate inhabitants about how the permafrost is thawing and the effects this has and will have on their lives.” Picture: Crate with Alexander (Sasha), during a work session. Notice the permafrost map gracing the wall. Summer 2018. Photo by Kathryn Tuyaara Yegorov-Crate.

Figure 3: “In the winter of 2018, I made a journey with Alexander to present knowledge exchanges with communities in the Central regions of the Sakha Republic. The last time I had been in these regions was fifteen years ago and I was shocked at how the once flat fields were now transformed into a patchwork of thermokarst, the above ground manifestation of the permafrost layer, found 1-3 meters underground, as it thaws. Our work in the two settlements, Khatilii and Siirdaakh, verified how inhabitants were facing similar challenges that my research communities faced on the Viliui. This included not only changes due to thawing permafrost, unpredictable weather patterns and the like, but also how inhabitants were stopping cattle breeding and young people were leaving for the city, a phenomenon I termed, the complexity of change.” Picture: View out the window as we drove to Khatilii. December, 2018. Photo by author.

Figure  4: A buluus is an underground storage area that Sakha have used since they came from the south to their northern homeland. It is nothing more than a tunnel dug down to the permafrost layer with a storage space there for perishables to be kept in the temperate seasons. The entryway typically resembles a small hut due to the need for an insulative structure to maintain the permafrost cool. The inundation of the ground with water, due to increases in precipitation and thaw water from permafrost, has flooded most buluus and rendered them useless. One of several comments on this include, “We have a buluus . . . we put our meat there . . . it is deep– but we have to watch it . . . in some places it holds the freeze and in others it doesn’t . . . we know that the permafrost is thawing . . . we can see it in the buluus! It melts now . . . it is not like before.” However, simultaneously inhabitants also have access to electric freezers, which many consider more convenient. The combination of climate change, economic development, and youth out-migration are interacting drivers of change for inhabitants, which I term ‘the complexity of change.’ Picture: “As I was returning to my host’s house after a day of interviews, I saw the juxtaposition of a long-abandoned buluus entry door against the backdrop of the modern Kutana school building and realized how perfectly it visually captured the complexity of change.” Photo by author.

Figure 5: In addition to climate change, economic transformations and demographic shifts in the rural regions, the relatively recent introduction of hi-speed internet has brought about a cultural shift. As one inhabitant put it, “I want to talk about the change in people, in people’s characters . . . now it is very rare to find receptive and interactive people here, for example, on the village streets–they are hard to find. Before people used to take the time to converse with each other. You would meet someone on the street and stop and talk and know the news from each other . . . now everyone walks along staring at their phone–no one needs anyone anymore . . . there is no interaction now . . . today people only interact over WhatsApp!” Picture: Electronic devices are increasingly present in the hands of very young children in both urban and rural settings. Elgeeii yhyakh at Ugut Kÿöl, 2018. Photo by author. 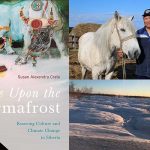