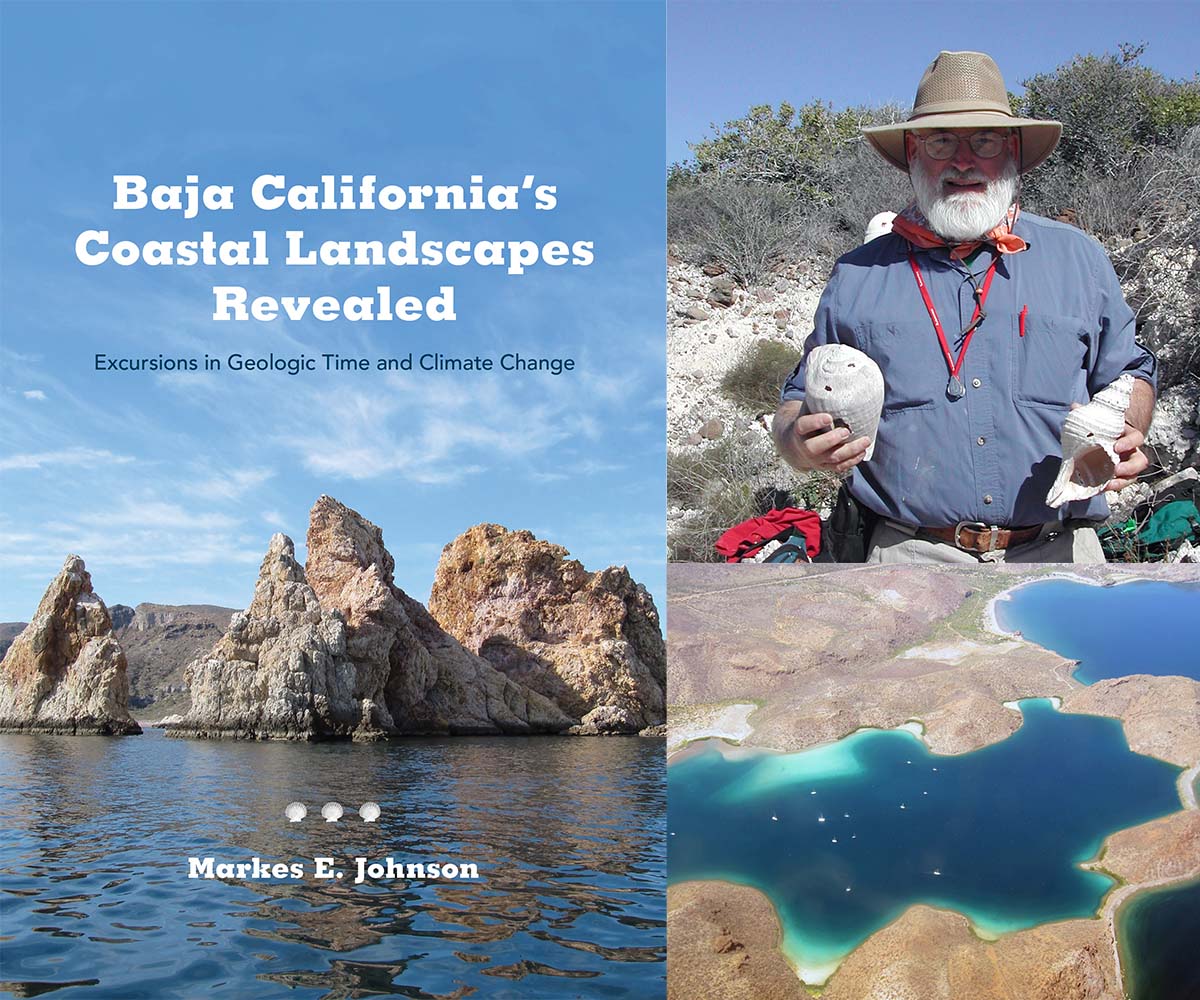 We recently published Baja California’s Coastal Landscapes Revealed by Markes E. Johnson. In this new work, expert geologist and guide Johnson takes us on a dozen rambles through wild coastal landscapes on Mexico’s Gulf of California. Descriptions of storm deposits from the geologic past conclude by showing how the future of the Baja California peninsula and its human inhabitants are linked to the vast Pacific Basin and populations on the opposite shores coping with the same effects of global warming. Today we share a reflection from the author about his time observing this amazing coastal landscape.

Conventional wisdom says that the physical act of making a journey often surpasses the traveler’s aim in reaching a chosen destination. More than 80 years have passed since the celebrated voyage in 1940 to Mexico’s fertile Sea of Cortéz by marine biologist Ed Ricketts (1897-1948) and writer John Steinbeck (1902-1968) aboard the chartered fishing vessel Western Flyer. The resulting narrative published as The Log from the Sea of Cortez become a cult classic much admired for the pair’s holistic view of nature clearly expressed well before the word ecology achieved the common usage it enjoys today.

It has been my good fortune to travel on a regular basis to the islands and peninsular shores bordering the Gulf of California over a span of 30 years, most often as a guide to college students studying geology and biology. During the 1990s, our trips were made overland from San Diego in rented vehicles that entailed long drives on the narrow, winding road of Mexico Highway 1. Later on, the logistics of air travel between Los Angeles and Loreto became more attractive, particularly in light of discounts for group travel. As a teacher, the most important advice offered to my students was to remain observant at all times, even while passing between destinations where studies were planned.  The same can be said for the exceptional opportunities afforded by flights over the Gulf of California, during which I have been known to provide students with a running commentary on the landscapes passing below us under invariably sunny skies.

The most casual of travelers cannot fail to be awed by extraordinary sights as viewed from high above that reveal the bare rocks of a desert landscape juxtaposed against the aquamarine tones of a bountiful sea. To and from Loreto, I find myself glued to the window (left side of the aircraft on south-bound flights and right side on north-bound flights). I am eager to seek out places where I have personal experience or where I know from the published literature that others such as Ricketts and Steinbeck visited and commented on. Much of the attraction is the realization that our knowledge of a landscape grows through a collective process accumulated through generations of explorers, researchers, and students. Many astonishing clues are there to be found in the landscape that inform us about how the Gulf of California was formed and how it evolved through geologic time to become the stupendous physical backdrop it is for such a productive body of water. Several of my favorite localities pop up between the coastal towns of San Felipe in the north and Loreto further south.

Volcán Prieto: Located near Puertecitos, well south of San Felipe, the volcanic edifice of the extinct Volcán Prieto rises 850 feet above sea level with its central crater marked by a beige dot representing a shallow pond deposit of clay washed from the sides of the crater during rare rain events brought north by subtropical depressions. On the northwest side of the volcano, the equally large Playa Costello Delta emerges from the mouth of Heme Canyon. A large salt flat is reflected in a flat white tone on the volcano’s southeast flank.

Punta Chivato:  Midway between Santa Rosalia and Mulegé, the promontory (or atravasada) of Punta Chivato rises like a “cross piece” thrust eastward into the Gulf of California.  It is the region where my students and I made our first studies in the early 1990s. Red colored volcanic rocks are partially surrounded by beige limestone that define a cluster of islands roughly four million years old during the early flooding of the gulf.  Telltale “Hammer-head Point” as some locals call it (upper right) is formed by a ridge of resistant limestone left in place on one flank of a former island.

Concepción Peninsula: Across from the town of Mulegé, the northwest directed tip of Concepción peninsula comes into sight as the aircraft flies over the 23-mile long Concepción Bay. The 2,362-ft. high Hawks Mountain (Sierra Gavilanes) is the highest peak on the peninsula (lower center). A series of merged alluvial fans (bajadas) spill into the shallows where the bay’s water is turquoises in color. Ricketts and Steinbeck viewed this shore from the Western Flyer on March 28, 1940. Further along at the closed end of the bay, extensive limestone penetrates deep into a labyrinth of inter-connected valleys to show that the peninsula was nearly breached during a higher stand in sea level some 3 million years ago.

Cerro Mencenares: On approach to Loreto, the aircraft starts its descent passing the western flank of the Cerro Mencenares volcanic complex covering an area of 58 square miles. The pattern of eroded valleys that radiate outward from the center of the complex like spokes on a wheel inform that the landscape below was once part of a small shield volcano. Seaward is Punta El Mangle (upper right), where extensive limestone was deposited against the volcano’s outer margin.

Isla Coronados: As the aircraft continues to descend, the lovely “Island of Crowns” comes into sight with its dazzling white beaches and halo of turquoise waters. The island was an active volcano only some 600,000 years ago and the low-lying apron of land extending to the south was part of an extensive lagoon that harbored a large coral reef. Today, the island is part of the protected Loreto Marine Park. The Western Flyer was anchored in the bay on the west side of the island on March 27, 1940.

North end of Isla del Carmen: During the months of November through May, a stiff northerly wind (viento norte) often blows down the axis of the gulf for days at a time. It means that aircraft landing at Loreto usually push farther south over the open Carmen Passage beyond the town before banking through a hair-pin turn to land into the wind on the airport’s tarmac. Spectacular views of Isla del Carmen are on offer during this process. One of the best views so afforded is the salt lagoon on the northeast side of the island (center), where salt was commercially extracted until 1960. The semi-circular embayment at Balandra (lower left) is more accessible to boaters from Loreto and it features the remains of a fossil coral reef that date from a time about 125,000 years ago when sea level was higher than today.

Lagoon at Puerto Escondido: After making the turn to line up with the runway at Loreto, the descending aircraft passes over the inner lagoon at Puerto Escondido. White flecks against a dark blue background are represented by sail boats at safe anchor within the inner lagoon covering an area of 125 acres sheltered by islets and natural breakwaters on its seaward rim. Stopping there on March 25, 1940, Steinbeck wrote that the hidden harbor is a place of magic. “If one wished to design a secret personal bay, one would probably build something very like this little harbor.”

Tabor Canyon: On final approach to the Loreto airport, aircraft descend to an altitude below the crest of the Sierra de la Giganta that form the spectacular backdrop to the coastal plain along this part of the Baja California peninsula.  Steinbeck and Ricketts spent a night camped out with new friends from town who invited the pair to join their hunt for the local mountain sheep (borrego).  None were encountered and Steinbeck was just as glad for that outcome.

Later in life, when John Steinbeck wrote Travels with Charley (1962), he commented that: “People don’t take trips, trips take people. For me, personally, it has rarely been the final destination on a journey to Baja California. Instead, it is about all the experiences on the way.

Markes E. Johnson is the Charles L. MacMillan Professor of Natural Science, Emeritus, at Williams College (Williamstown, Massachusetts).  He is the author of three books on the geology and ecology of landscapes in Baja California: Discovering the Geology of Baja California (2002); Off-Trail Adventures in Baja California (2014); and most recently Baja California’s Coastal Landscapes Revealed (2021) all published by the University of Arizona Press. His last two books include color plates showing landscapes photographed during various commercial flights between Los Angles and Loreto in Mexico’s Baja California Sur. 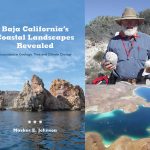