The final chapter in the book is a fascinating interview with Peter Murrieta by Aldama. Murrieta is described as “one of the most significant of Latinx creators, writers, and producers actively shaping a Brown-ocular twenty- first-century TVLandia. His scroll-long resume includes countless accolades, accomplishments, and awards, including multiple Emmys for Wizards of Waverly Place and an Imagen Award for Mr. Iglesias. He is also the creator of the comic book Rafael Garcia: Henchman. He is a Latinx pop cultural creative without measure.”

Latinx TV, which hits the shelves in April, is part of the University of Arizona Press’s Latinx Pop Culture series, co-edited by Frederick Luis Aldama and Arturo J. Aldama.

For a bit of insight, check out this discussion with Mighty Peter (Peter Murrieta) and Professor Latinx (Frederick Luis Aldama) on their respective top 5 Latinx TV picks of all time: 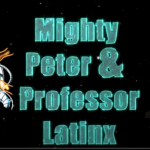