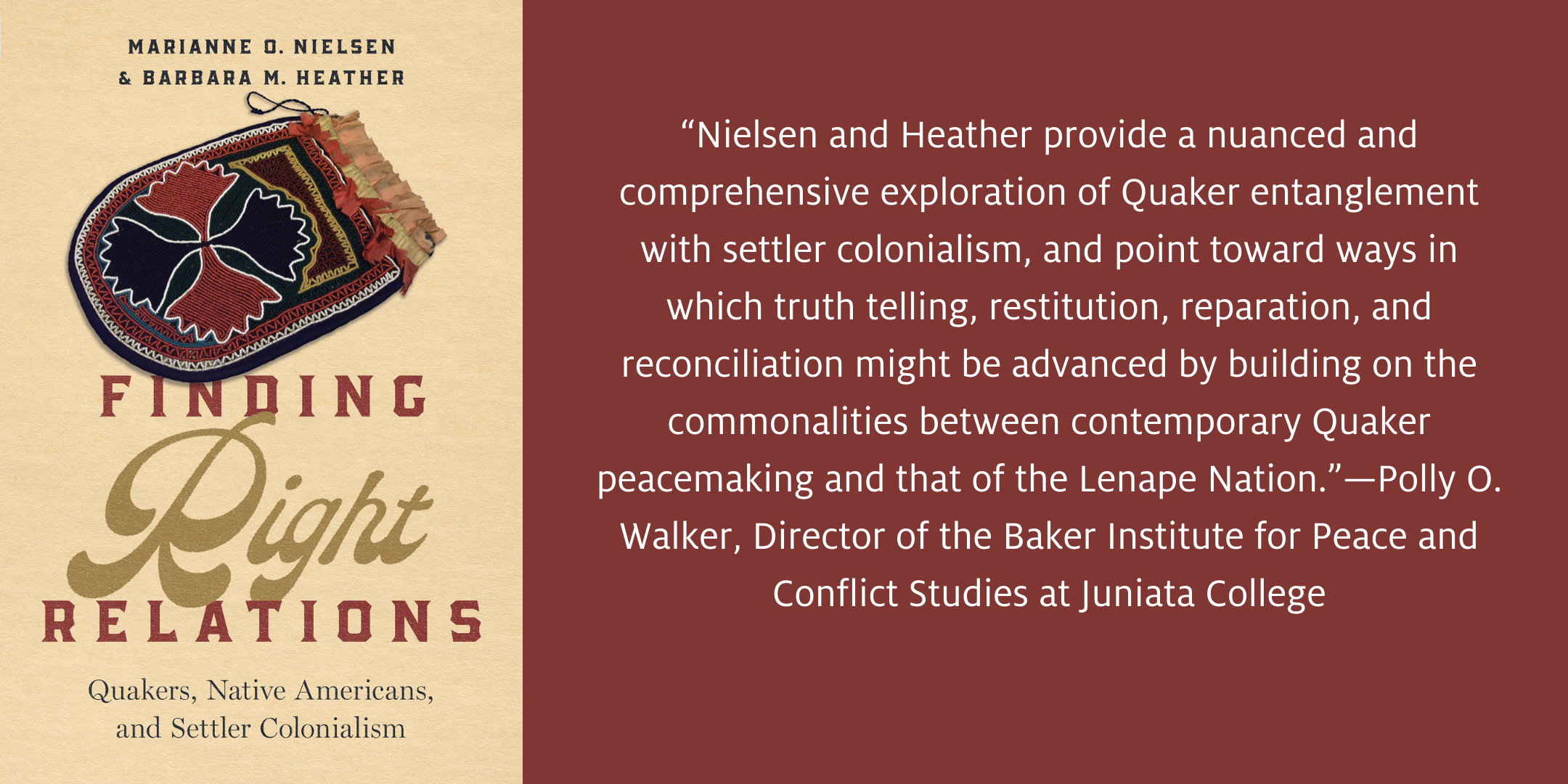 In Finding Right Relations: Quakers, Native Americans, and Settler Colonialism, Marianne O. Nielsen, and Barbara M. Heather explore the contradictory position of the Quakers as both egalitarian, pacifist people, and as settler colonists. This book explores major challenges to Quaker beliefs and resulting relations with American Indians from the mid-seventeenth century to the late nineteenth century. Below, Nielsen and Heather get to a bit of the heart of their new book in five questions:

In your book you set out to shed light on the real history between Quaker settlers and Native Americans. In doing so, you offer the chance to change a modern perspective on Quakers and Friends overall. Was that your intention?

That was not quite our intention. Our focus initially was on peacemaking among Quakers and, because there were strong similarities between Quaker and Indigenous decision-making practices, on whether Penn incorporated any Lenape principles or practices of peacemaking into his form of government. During this period of our research, we came across inconsistences in Penn’s time as Governor of Pennsylvania, such as the limits on his respect for, and understanding of, Indigenous cultural practices related to land use. There were also passages in his documents that were clearly paternalistic in tone. Penn is not documented as objecting to the requirements of Charles II that he Christianize and civilize the Lenape, although he did object vociferously to the suggestion, he needed a militia. In fact, a second thread was Penn’s insistence on having no militia. Rhode Island, which also had a mix of Quaker and non-Quaker settler-colonists, chose to fund a militia but include a right to conscientious objection. We wondered why Penn did not choose this for Pennsylvania, even as he was soliciting non-Quaker and non-pacifist settlers for his province? He failed to address the potential for violence. He needed plenty of settlers to make back the money he spent on negotiations with the Lenape but adding non-pacifists to the list inevitably caused an issue when settler-colonists and Lenape came into conflict.

Our intention therefore shifted to a focus on a broader issue, that of conflicts of faith, especially the Peace testimony and the Testimony to Equality. This Testament emerged as a belief in spiritual equality, i.e. that in the eyes of God all are equal.  We quickly realized that in the eyes of settler-colonists, the Indigenous Peoples were not equal. That allowed many settler-colonists, including Quakers, to cheat and defraud the Lenape, primarily of their lands. When this led to war, the Peace Testimony challenged the Quaker response. Penn had not set up any alternatives to a militia, such as Rhode Island’s law allowing conscientious objection. Quakers lost control of the government and never regained political power.

Do you find that it is difficult for modern Quakers and others to rectify this history with how they may see themselves today?

On the surface we think many Friends accept that some Quakers have acted badly, whether with good intentions or knowingly to reach their own goals, but in practice we sense that our findings go deeper, bringing out resistance. Quakers have long been known for their aversion to conflict and we wonder if this also is behind their responses. It was painful to confront the reality that Quakers quite often did not live up to their beliefs and even more so to find some Friends protesting our descriptions of that behavior.

Quakers such as the very active Boulder Colorado Friends Meeting have accomplished much toward reconciliation and reparation, as has the Canadian Friends Service Committee. Sometimes it seems easier to blame all those non-Quakers who do not question their assumptions, and to think of Quakers as behaving better than those others. Academically and personally both sides of this equation are hard to accept. How could a religious sect with such a strong belief in their Truth and such strong Testimonies, especially to Peace and to Spiritual Equality of peoples, commit cultural genocide? We hope that some readers of our book will understand why we became so involved with the contradictions of the Quaker faith and with the practical expressions of it, but also saw the potential of the Testimony to Peace and its corollary, peacekeeping. The cost of harms caused by all forms of colonialism to Indigenous Peoples are untenable. Can peacekeeping contribute to a beginning of reparation and reconciliation?

The damage all forms of colonialism have cost the Indigenous of this land is often untenable, how can documenting this one area help further change or reconciliation?

Colonialism was and still is all-encompassing and insidious. By documenting this one situation, it may help raise awareness among readers of the continuing impacts such as high Indigenous mortality rates, poverty, and political suppression, and the need for resolutions. Quakers believed themselves to be above colonialism because of their beliefs, but they also fell victim to the greed and arrogance caused by colonial ideologies. They are the seeming exception that wasn’t an exception. By reinterpreting their history and showing the accumulating impacts of colonialism on their beliefs and behavior, we are providing a warning story, but also an example of hopeful change, as many Quakers accept the guilt of their predecessors and are working to further change and promote true reconciliation. Indigenous Peoples are working hard to overcome the impacts of colonization that still affect their communities and citizens, but there are many actions that non-Indigenous individuals, organizations and governments could take to offer reparations and assistance, if such are desired by Indigenous Peoples. We give some examples in this book.

How do you think we begin to put Indigenous knowledge into practice now with climate change and other issues at our heels?

Until the advent of colonialism, Indigenous Peoples world-wide practiced sustainable economies, that recognized that humans are just an interconnected part of creation, and a not very important one at that. Human activities are hurting Mother Earth and if we continue, she may become uninhabitable for us and many of our fellow beings.

Indigenous knowledge is the property of Indigenous Peoples and it is their choice if they wish to share it with non-Indigenous peoples. If they so choose, there is a lot the knowledge-holders could teach us about our role on this planet—how to end exploitation of natural resources, how to rebuild our damaged ecologies, and how to live sustainable lives that help our planet thrive, in other words, to have right relations with all those with whom we share the planet. The question is, will non-Indigenous people, organizations and governments listen and be willing to pay the high short-term costs to put us on the right path?

Ultimately, what do you hope readers, scholars, and others get from this book?

We hope that they will understand that colonialism has not stopped and that it continues to have serious impacts on Indigenous Peoples world-wide. Second, we hope our readers will gain a stronger understanding of colonialism’s impacts on the descendants of settler-colonists, its ability to become part of our lives, our ideologies, and our language – to permeate all that we are, even those whose strong religious faith should mitigate against such beliefs. Finally, we hope they understand that it is possible to counteract these impacts as non-Indigenous people become more aware and take action to assist Indigenous peoples in their efforts, as Indigenous Peoples so choose. 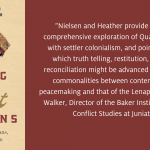