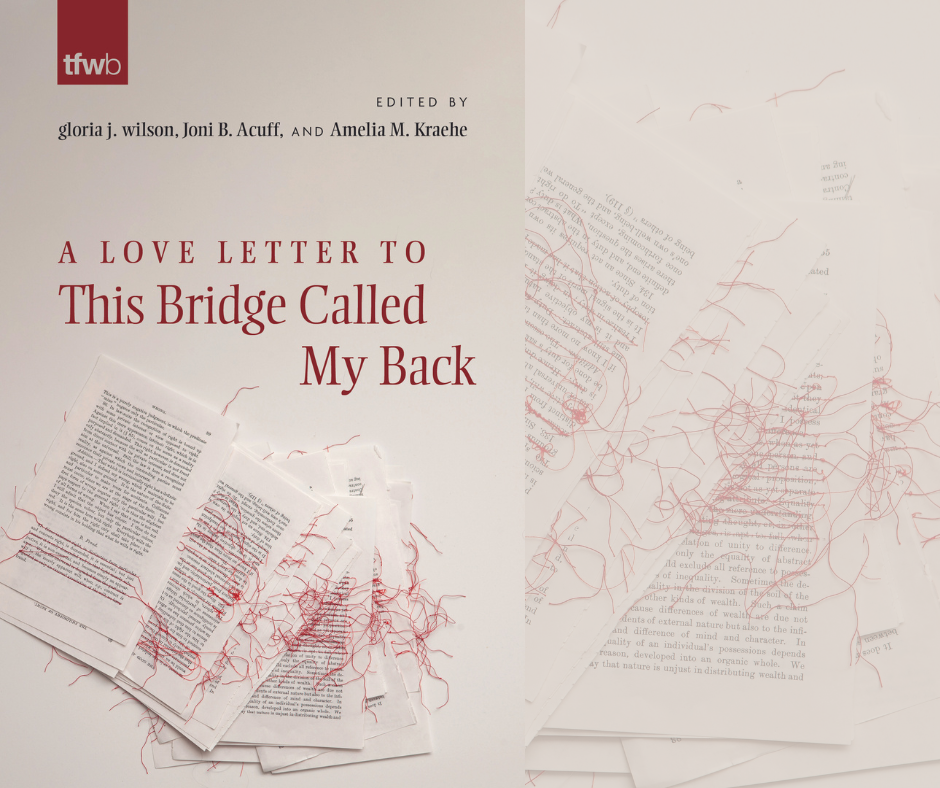 In 1981, Chicana feminist intellectuals Cherríe Moraga and Gloria Anzaldúa published what would become a touchstone work for generations of feminist women of color—the seminal This Bridge Called My Back: Writings by Radical Women of Color. To celebrate and honor this important work, editors gloria j. wilson, Joni B. Acuff, and Amelia M. Kraehe offer new generations A Love Letter to This Bridge Called My Back.

Here’s an excerpt from the book’s introduction that’s part of a larger Q&A interview the editors did with each other that shares details of the book, and more specifically here, why Love Letters:

AMY So why create a collection of love letters? What is the significance of that framing?

GLORIA Perhaps it’s because I grew up listening to stories my mother told about my father writing so many love letters to her during their courtship! It signifies deep commitment to human-being and living.

AMY gloria, that sounds so intimate.

JONI It’s very intimate. Meaning, it takes more time and effort. When you think about a love letter, you don’t think about somebody typing something out on a computer. You think about a handwritten letter, in cursive. It’s a romanticized representation of something mundane. It is illustrative of how something so simple can be presented in a profound way. Crafting a love letter is time- consuming, it takes effort and intentionality, and it also takes patience. It’s a different kind of energy, meaning that it’s an opportunity to be vulnerable in ways one might not be face-to-face.

AMY The intimacy that’s conveyed and captured in a love letter can, like you said, Joni, be about quotidian happenings, but life’s texture and complexity are contained in the everyday. So much insight can come from sharing the small bits of life. Those bits are passageways to deeper levels of understanding of another person and their condition. They are symbolic spaces for relationship, and those spaces are opportunities to touch or come into the presence of another being.

gloria, you said that your dad wrote love letters to your mom. We now have digital technologies that allow people to engage with each other very quickly all the time through text and social media, but a love letter is a classic form that has existed across time and in different geographic and cultural locations. It is inflected culturally and differently depending upon who is writing and the tradition that they come from, but it endures as a classic form of dialogue. I think that is important here. This book is in conversation, a deep, committed kind of conversation with the original Bridge authors, and with thousands of other folks. If we look at the number of Google citations for This Bridge Called My Back, it is in the thousands, and they keep climbing every day. That is just citations, to say nothing of the incalculable numbers of other readers who thumb the book’s pages each day. So A Love Letter is in conversation not only with the original Bridge writers but also with every-one who is reading that text and, like us, is passionate about theory in the flesh, sensing and making sense through aesthetic forms of philosophy, knowledge, communication, and collectivity. That is exciting to me, and maybe it is only possible through a love letter.

GLORIA Yeah. You know, as I was thinking about this question, I was thinking that one has to be vulnerable. So when I think of a love letter, I think of it as a radical act of care. It’s like humbling yourself to someone else, opening yourself wide and performing an act that is so private and personal. You know, a love letter is not intended for the world to witness, necessarily, although there are examples of public pronouncements of love. In all, it’s intended for the recipient in a very direct manner.

When I think about love letters that I have written, I recall including traces of myself in the form of swatches of fabric from clothing or artwork, with the intent of distilling, suspending, or cementing a memory. In the case of this Love Letter anthology, my desire was to offer an extension of the sentiments tied to the expression of a love letter, and yet I felt the need to share a space and record it collectively and in material form—record it with others for whom the original book has made an impact. In doing this, the question I thought with and attempted to answer was: What opportunity might be created as an acknowledgement of thanks for each of these women, for their work and its impact on my life because it may not be possible to do so in person?

My response was to attempt a collective love letter, as an insistence for radical love for women of color in the wake of forced silences and settlements via colonialisms and imperialisms; it is an aesthetic pronouncement—an outward declaration of gratitude. But in excess of this, to create an archive of collective voice. Moraga and Anzaldúa would refer to the contributors to This Bridge as “women from all kinds of childhood streets,” who speak to past, present, and current conditions of life in and into the afterlives of containment, migration, silencing, diaspora. For the contributors of the original text, This Bridge Called My Back, who are still present in this life and for those who exist with us in the afterlife— this book serves to express that I am thinking about and with them; thinking with their thoughts and sentiments and creative pronouncements, which reveal the conditions of their existence forty years ago. This Love Letter might illuminate traces of what is still occurring and what might emerge as contemporary conditions and our current moment. And that’s what is, in my opinion, the most radical act of care, like we said in the beginning. Like Joni said, it’s something that you put energy into, writing it out.

AMY Along the same lines as This Bridge, a collection like this one can be healing for so many people. Many contributors returned to the idea of bridges and bridging. Can a love letter be a bridge? Here I’m thinking not only of connection but also healing. Love letters heal in ways that may be different from bridges. Bridges enable us to move and transition. They connect one realm to another because they are liminal spaces, in- between spaces. But love letters might do something else. So in that sense, A Love Letter does not seek to replicate This Bridge. It is not an addition to a series or an attempt to replicate the original text. It is intending something different and for a very different moment in time.

gloria j. wilson is co-founder and co-director of Racial Justice Studio and an assistant professor in the School of Art at the University of Arizona. Her research centers cultural studies and Black studies engagements with theories of racial formations, anti-racism, and critical arts-based praxis.

Joni B. Acuff is an associate professor in the Department of Arts Administration, Education, and Policy at The Ohio State University. Acuff utilizes frameworks such as critical race theory, critical multiculturalism, Black feminist theory, and Afrofuturism to develop and disseminate pedagogical and curriculum strategies that activate critical race knowledge in art education.

Amelia M. Kraehe is associate vice president for equity in the arts, co-founder and co-director of Racial Justice Studio, and an associate professor in the School of Art at the University of Arizona. She researches and teaches about intersectional anti-racism, the arts, and creative agency. She is co-author of Race and Art Education and co-editor of Pedagogies in the Flesh: Case Studies on the Embodiment of Sociocultural Differences in Education and The Palgrave Handbook on Race and the Arts in Education. 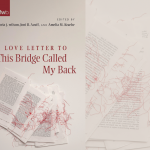