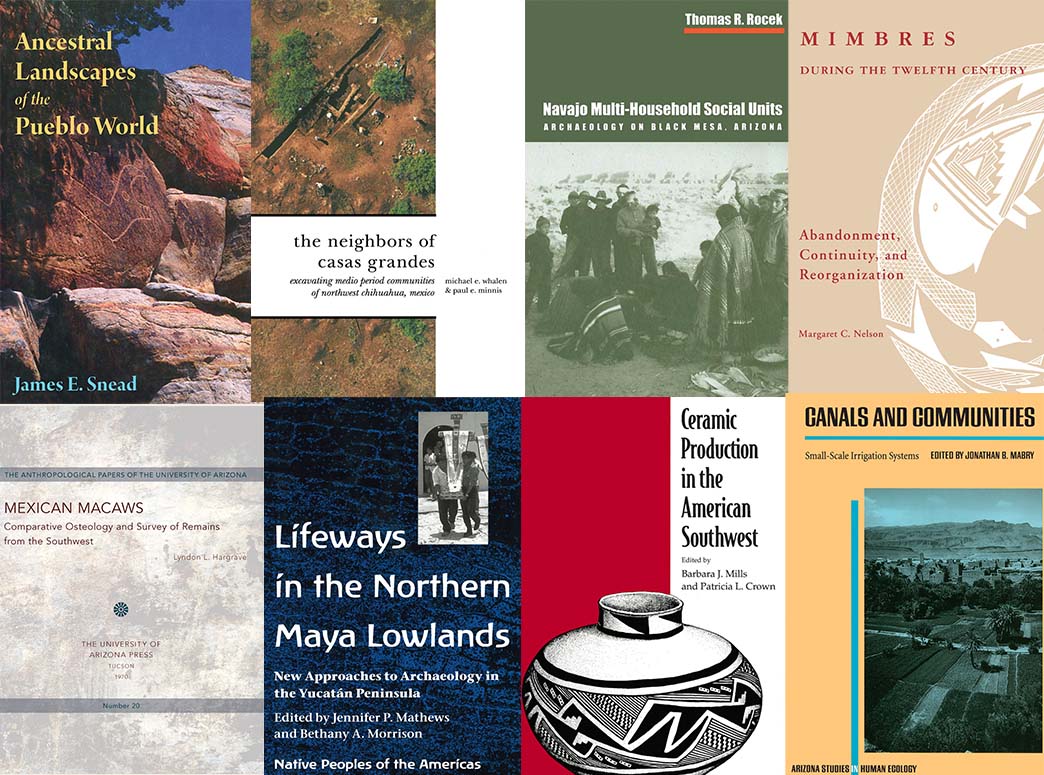 The University of Arizona Press is thrilled to announce that twenty backlist archaeology books are now available Open Access thanks to a grant from the National Endowment of the Humanities. The titles, which include classics as well as some newer works, are available for online reading or downloading from Open Arizona, the press’s OA portal. These works include works by leading archaeologists. Learn more about each title:

Ancestral Landscapes of the Pueblo World
by James E. Snead
This revolutionary study makes an important contribution to landscape archaeology and explains how the Precolumbian Pueblo landscape was formed.

Ancestral Zuni Glaze-Decorated Pottery
by Deborah L. Huntley
This research explores interaction networks among residents of settlement clusters in the Zuni region of westcentral New Mexico during the thirteenth and fourteenth centuries AD.

Canals and Communities
by Jonathan B. Mabry
Canals and Communities can serve as a sourcebook for social scientists and development planners investigating the cultural ecology of irrigated agriculture, the ethnology of cooperative social formations, the politics of collective-resource institutions, and the sociology of rural development.

Ceramic Ethnoarchaeology
Edited by William A. Longacre
Drawing on projects undertaken around the world, in the Phillipines, East Africa, Mesoamerica, India, in both traditional and complex societies, the contributors focus on identifying social and behavioral sources of ceramic variation to show how analogical reasoning is fundamental to archaeological interpretation.

Ceramic Production in the American Southwest
Edited by Barbara J. Mills and Patricia L. Crown
This volume covers nearly 1000 years of southwestern prehistory and history, focusing on ceramic production in a number of environmental and economic contexts.

Hinterlands and Regional Dynamics in the Ancient Southwest
Edited by Alan P. Sullivan III and James M. Bayman
This work was the first volume dedicated to understanding the nature of and changes in regional social autonomy, political hegemony, and organizational complexity across the entire prehistoric American Southwest.

Landscapes and Social Transformations on the Northwest Coast
by Jeff Oliver
The Fraser Valley in British Columbia has been viewed historically as a typical setting of Indigenous-white interaction. Jeff Oliver reexamines the social history of this region from pre-contact to the violent upheavals of nineteenth and early twentieth century colonialism.

Lifeways in the Northern Maya Lowlands
Edited by Jennifer P. Mathews and Bethany A. Morrison
This book was the first volume to focus entirely on the northern Maya lowlands, presenting a broad cross-section of research projects in the region by a wide range of scholars.

The Marana Community in the Hohokam World
Edited by Suzanne K. Fish, Paul R. Fish, and John H. Madsen
This account of Classic Period settlement in the Tucson Basin between A.D. 1100 and 1300 was the first comprehensive description of the organization of territory, subsistence, and society in a Hohokam community of an outlying region.

Mexican Macaws
By Lyndon L. Hargrave
The Anthropological Papers of the University of Arizona is a peer-reviewed monograph series sponsored by the School of Anthropology. Established in 1959, the series publishes archaeological and ethnographic papers that use contemporary method and theory to investigate problems of anthropological importance in the southwestern United States, Mexico, and related areas.

Mimbres during the Twelfth Century
By Margaret Nelson
While most scholars view abandonment in terms of failed settlements, Margaret Nelson shows that, for the Mimbres, abandonment of individual communities did not necessarily imply abandonment of regions. By examining the economic and social reasons for change among the Mimbres, Nelson reconstructs a process of shifting residence as people spent more time in field camps and gradually transformed them into small hamlets while continuing to farm their old fields.

Multidisciplinary Research at Grasshopper Pueblo, Arizona
By Edited by William A. Longacre, Sally J. Holbrook, and Michael W. Graves
This volume presents the results of research from the University of Arizona’s archaeological field school at Grasshopper Pueblo in Arizona. Contributors considered issues of environmental and climactic change; regional and interregional economics; and subsistence change.

Navajo Multi-Household Social Units
By Thomas R. Rocek
In a rigorous and innovative study, Thomas R. Rocek examines the 150-year-old ethnohistorical and archaeological record of Navajo settlement on Black Mesa in northern Arizona. Rocek’s study not only reveals a rich array of interacting factors that have helped to shape Navajo life during this period but also constructs a valuable case study in archaeological method and theory, certain to be useful to other researchers of nonurban societies.

Neighbors of Casas Grandes
By Michael E. Whalen and Paul E. Minnis
Casas Grandes, or Paquimé, in northwestern Mexico was of one of the few socially complex prehistoric civilizations in North America. Based on more than a decade of surveys, excavations, and field work, the authors provide a comprehensive look at Casas Grandes and its surrounding communities.

Of Marshes and Maize
By Bruce B. Huckell
This work presents archaeological information obtained from small-scale investigations at two deeply buried preceramic sites in Arizona’s Cienega Creek Basin. Its report on excavations at the Donaldson Site and at Los Ojitos offers a thorough description of archaeological features and artifacts, floral and faunal remains, and their geological and chronological contexts.

Sedentism and Mobility in a Social Landscape
By Mark D. Varien
Research on hunting and gathering peoples has given anthropologists a long-standing conceptual framework of sedentism and mobility based on seasonality and ecological constraints. This work challenges that position by arguing that mobility is a socially negotiated activity and that neither mobility nor sedentism can be understood outside of its social context. Drawing on research in the Mesa Verde region that focuses on communities and households, Mark Varien expands the social, spatial, and temporal scales of archaeological analysis to propose a new model for population movement.

Settlement, Subsistence, and Society in Late Zuni Prehistory
By Keith W. Kintigh
Beginning about A.D. 1250, the Zuni area of New Mexico witnessed a massive population aggregation in which the inhabitants of hundreds of widely dispersed villages relocated to a small number of large, architecturally planned pueblos. Over the next century, twenty-seven of these pueblos were constructed, occupied briefly, and then abandoned. Another dramatic settlement shift occurred about A.D. 1400, when the locus of population moved west to the “Cities of Cibola” discovered by Coronado in 1540. Keith W. Kintigh demonstrates how changing agricultural strategies and developing mechanisms of social integration contributed to these population shifts.

Sourcing Prehistoric Ceramics at Chodistaas Pueblo, Arizona
By Maria Zedeño
For decades archaeologists have used pottery to reconstruct the lifeways of ancient populations. It has become increasingly evident, however, that to make inferences about prehistoric economic, social, and political activities through the patterning of ceramic variation, it is necessary to determine the location where the vessels were made. Through detailed analysis of manufacturing technology and design styles as well as the use of modern analytical techniques such as neutron activation analysis, Zedeño here demonstrates a broadly applicable methodology for identifying local and nonlocal ceramics.

The Southwest in the American Imagination
Edited by Curtis M. Hinsley and David R. Wilcox
This work presents a cultural history of the Hemenway Expedition and early anthropology in the American Southwest, told in the voices of its participants and interpreted by contemporary scholars.

White Roads of the Yucatán
By Justine M. Shaw
Presents original field data collected with the Cochuah Regional Archaeological Survey at two ancient Maya sites, Ichmul and Yo’okop. Both centers chose to invest enormous resources in the construction of monumental roadways during a time of social and political turmoil in the Terminal Classic period. Shaw carefully examines why it was at this point—and no other—that the settlements made such a decision. 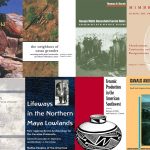