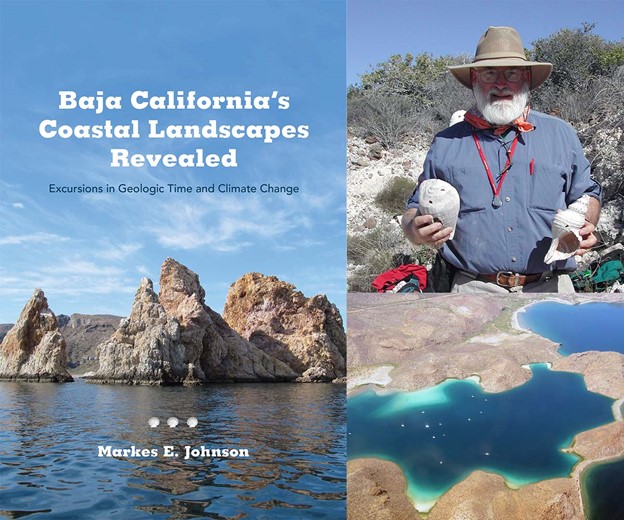 Baja California’s Coastal Landscapes Revealed by Markes E. Johnson was published in November 2021. Therein, expert geologist and guide Johnson takes us on a dozen rambles through wild coastal landscapes on Mexico’s Gulf of California. Descriptions of storm deposits from the geologic past conclude by showing how the future of the Baja California peninsula and its human inhabitants are linked to the vast Pacific Basin and populations on the opposite shores coping with the same effects of global warming. In this update on his work on storm deposits, the author shares new experiences and new images from fieldwork conducted in June 2022.

Whether or not another storm of similar magnitude can be expected to reach these same shores is not in contention, but rather how soon such an event is likely to occur.  The current state of affairs in which we find ourselves living through accelerated global warming was the main reason for writing my book on the region’s coastal landscapes.  In part, the book’s goal was to relate the much smaller Gulf of California to the vast Pacific Ocean basin where major hurricanes are far more prevalent and reach across to Asian shores on the opposite side, where much damage is done to places in the Philippines, mainland China, Taiwan, and Japan.  After my isolation due to the covid-19 pandemic during the last two years, the opportunity arose for me to make my first excursion back to Baja California for a two-week visit in June 2022.  The objective was to proceed directly to the region around San Basilio Bay (subject of Chapter 4 in the book), where a team was assembled to produce a video focused on the area’s most interesting geological features.

I have described the San Basilio area with its ancient Pliocene volcanic islets as one of the best-kept secrets hidden by a remote landscape.  For me, it was like a long-delayed home-coming to finally reach the safe-haven of the Spanish Contessa’s former house overlooking the embayment.  Much of the bay is surrounded by massive cliffs of rhyolite, which emerged from volcanic eruptions roughly four million years ago just as they did at Clam Bay nearby to the north.  Two of the goals for the visit were to include drone footage with the video under production and to affix a set of tags to some of the boulders in the deposit at Clam Bay.  The metal tags are small and unobtrusive (only an inch in diameter) but numbered and cut with a notch to point in an upward direction after attachment to a boulder’s vertical surface.  The drone footage captured not only a spectacular overview of the entire deposit, but hovered overhead as I recorded dialog for the video and then worked with the crew to implant a few tags on selected boulders near the water’s edge.

Clam Bay and its coastal boulder deposit: Located on a normally placid bay a short distance north of the larger San Basilio embayment, the storm deposit at Clam Bay (Ensenada Almeja) forms an arc-shaped pattern that encloses an area of 3.25 acres behind a high wall of loosely piled boulders and cobbles.  The drone image reflects the darker sub-surface extent of the deposit, which borders the source of erosion at the tip of the peninsula (center-right part of the image) and curves off to the far end where a small sandy beach appears (upper-center left part of the image).  The overall shape of the deposit is due to the refraction of storm waves arriving from the east (left) and turning southward into the bay.  The bottom of the image faces to the north.  A 30-foot sailboat anchored in the bay (center-left part of the image) gives a sense of scale to the deposit.

Rocky shoreline at Clam Bay:  The view in this image was captured overhead by the drone as author Markes Johnson (center in blue shirt) is video-taped explaining how strong wave action eroded large boulders from the jointed rhyolitic cliffs at the shore.

Preparations to affix a boulder tag:  Hovering closely overhead, the drone captures action as the author (right) works with team member Norm Christie (left) to prepare epoxy for attachment of a boulder tag.

Big shore boulder:  Taken at ground level, this image shows the author standing next to one of the larger rhyolite boulders in the Clam Bay storm deposit (left).  Based on its dimensions and the relative density of the rock, the boulder is estimated to weigh about four metric tons.

Tag placement:  In this image, the author holds a numbered metal tag with a notch pointing upward against the vertical side of a small rhyolite boulder.  The surface was prepared prior to fixing the tag in place with epoxy.

More video action:  Ground view with more video action showing the author (right) speaking about the storm deposit at Clam Bay.  A colony of pelicans sat on an offshore rock (upper left) as the only audience in attendance.

The general climate in the American southwest and adjacent Mexico is currently in transition between a La Niña phase and the next episode of El Niño years when hurricanes in the eastern Pacific basin are expected to be more numerous due to excessive heating of surface waters stretching over the equatorial Pacific Ocean.  After the next big storm enters the Sea of Cortéz, Professor Johnson will return to Clam Bay to assess the degree to which a series of tagged boulders have been displaced.  The coastal boulder deposit at Clam Bay is regarded as very young in age due to its unconsolidated nature, meaning that individual rocks are loosely aggregated and not cemented together as a solid conglomerate.  Moreover, it is an unfinished deposit meaning that more erosion is likely to occur in the near future as big storms lash the shoreline.  The coastal landscapes at San Basilio Bay and elsewhere all along the eastern coast of the Baja California peninsula suggest that the El Niño pattern of weather was far more prevalent in the past than today, and that global warming may be returning us to a comparable time of more severe coastal erosion and coastal flooding.  Time will prove the veracity of such a prediction, perhaps sooner than one might guess.

Markes E. Johnson is the Charles L. MacMillan Professor of Natural Science, Emeritus, at Williams College (Williamstown, Massachusetts).  He is the author of three books on the geology and ecology of landscapes in Baja California: Discovering the Geology of Baja California (2002); Off-Trail Adventures in Baja California (2014); and most recently Baja California’s Coastal Landscapes Revealed (2021) all published by the University of Arizona Press. His last two books include color plates showing landscapes photographed during various commercial flights between Los Angles and Loreto in Mexico’s Baja California Sur. 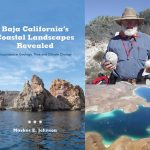