In a recent issue of Hispanic Outlook on Education Magazine, Frederick Luis Aldama, aka Professor Latinx, wrote a call to action to preventing the damage caused by the growing censorship of comics and literature.

Aldama is co-editor of the University of Arizona Press’s Latinx Pop Culture series, and is editor of one it’s newest titles, Latinx TV in the Twenty-First Century, which offers an expansive and critical look at contemporary television by and about U.S. Latinx communities.

Here’s an excerpt from Aldama’s article on censorship:

As I wrap this up, I remind readers of the urgency of our call to action as Latinx educators and others – librarians, familia, and members of the broader community. Over the last decade or so, I’ve noticed the inching forward of more Latinx fiction and nonfiction in the form of comics and prose, making it to library shelves and K-12 and college classroom desks. Yet, such books are still few and far between, hovering in the low single percentages of the total amount of books published every year. And yet, at 19% of the total US population, we are the majority of historically underrepresented people in this country. The banning of the few Latinx books we have managed to get into our learning and exploring spaces will quickly result in our total absence from these spaces.

So, when librarians and teachers are forced to remove from shelves and desks books like Aristotle and Dante Discover the Secrets of the Universe, House on Mango Street, Always Running, Bless Me, Ultima, Poet X, The Brief Wondrous Life of Oscar Wao, How the Garcia Girls Lost their Accents, and In the Dream House, among many Latinx titles that have been banned in different regions and districts across the land, what becomes cemented in their place is fear, prejudice, rigidity of thought, and the notion of who belongs and who doesn’t.

Let’s follow our common sense and science. Let’s listen to those like Bertrand Russell, who already nearly a century ago in Education and the Good Life, asked adults to be open and honest with youth about all matters, including taboo and stigmatized subjects. Let’s stop thinking of young people as passive absorptive sponges and as snowflakes easily crushed. Let’s stop acting from fear that forecloses possibilities. And let’s start thinking and treating young people as they are: actively engaged and active recreators of the world. That is, let’s act with intelligence, courage, and creativity. Let’s stand with our fellow educators and librarians to continue to open creative spaces that allow all youth to explore and grow fluid, messy, exuberant, complex patterns of thought, behaviors, identities, and experiences that will lead to their innovating in the areas of literature, art, science, and technology. 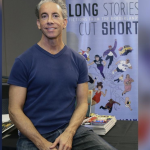