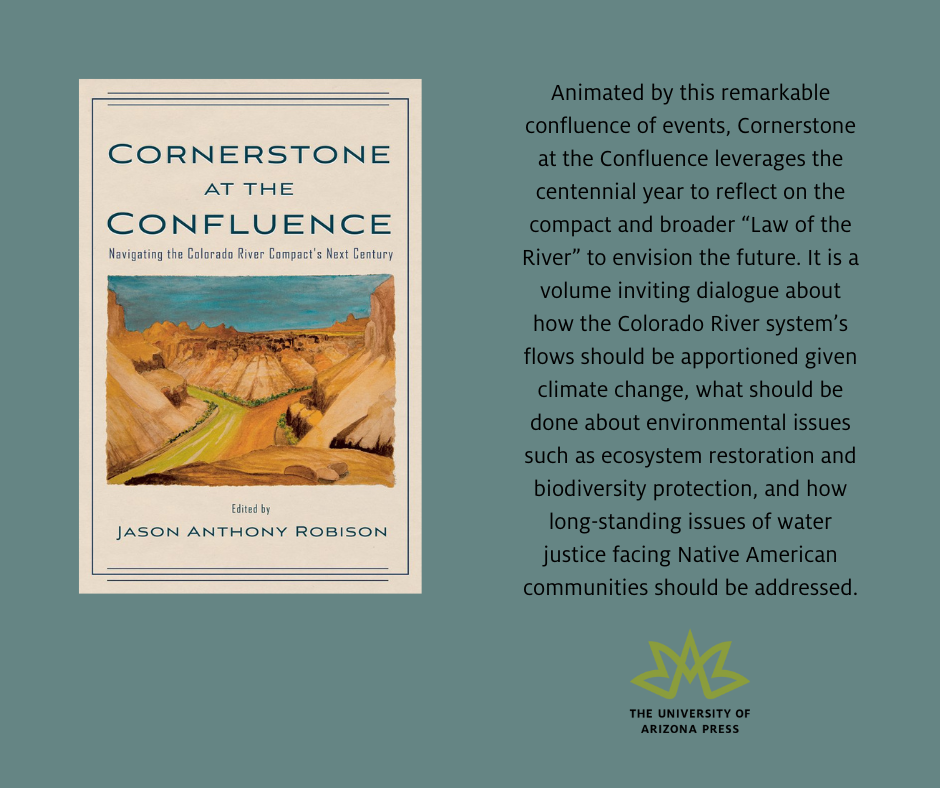 This week marks the one hundredth anniversary of the signing of the Colorado River Compact. “The Compact,” writes Jason Anthony Robison in the introduction to the new volume Cornerstone at the Confluence, “is the cornerstone of a proverbial pyramid—an elaborate body of laws colloquially called the “Law of the River” that governs how human beings use water from the river system dubbed the ‘American Nile.’ ”

Robison is just one of a chorus of expert voices that emerge in this important new book, published this week. Today we offer an excerpt from Robison’s introduction to the work.

The American West is on fire—and, no doubt, it is not alone.

Not a day has gone by this summer without new media coverage of unrelenting drought, drained reservoirs, record-shattering temperatures, all-consuming forest fires, busted or busting farms, bullets-sweating cities, and so on down the line. Glancing at the U.S. drought monitor, a blood-red octopus hovers over much of the arid region’s heart—the Colorado Plateau and the Great Basin—with elastic tentacles splaying hundreds of miles in every direction. And it’s not as though the news or drought monitor are needed to glean what’s going on. You can feel it—from suffocating afternoon rays trapped by urban heat islands to post-apocalyptic, smoky air jetting up in bomb-like plumbs over the ridgeline (or closer). It all feels smothering and smoldering. Something is off, beyond the COVID-19 pandemic.

The Colorado River Compact’s centennial arrives in this surreal space. No fewer than forty million people have come to rely on the life-giving, prosperity-yielding flows controlled by this document. Signed in the colonial city of Santa Fe, New Mexico, on November 24, 1922, the Compact is the cornerstone of a proverbial pyramid—an elaborate body of laws colloquially called the “Law of the River” that governs how human beings use water from the river system dubbed the “American Nile.”

History was made with the Compact’s drafting a century ago. Never before had Western states finessed their tense, frequently contentious relationships over coveted interstate rivers via negotiations under the U.S. Constitution’s Compact Clause. Before the Compact’s drafting, the Supreme Court and its “equitable apportionment doctrine” had been the only place to go. The 1922 negotiations changed that game. And the Law of the River has amassed since.

It’s actually amassing right now, and in ways that will shape the Colorado River Basin and its vast environs for a generation, possibly longer. The Compact’s centennial could not be more serendipitous in timing. In 2000, the most severe drought in recorded history began in the basin. More than two decades later, it’s still here. “Drought” is too tame a word to be clear— “megadrought” or “aridification” better capture what’s happening—but the cause is the same regardless: climate change. Again, you can feel it. What it requires of human relationships with the river system is often difficult for our species. We have to adapt. We, too, have to change. The serendipity lies there. Spurred by the megadrought, new management rules for the river system are being negotiated as the Compact turns a century old—a process that must conclude by 2026. While it does not involve Compact renegotiation in a formal sense, the process nonetheless holds monumental importance for everyone connected to the river system.

And there have never been more of us, accounting for all of human history, than at the Compact’s centennial. The dependent population of forty million people entails a form of record breaking that parallels the climate related events setting new bars across the Colorado River Basin and the globe. The trends are inseparable. Not only does this population inhabit the 244,000-square-mile basin proper—including cities such as Phoenix, Tucson, and Las Vegas—it stretches into urban centers tens and hundreds of miles away. Witness twenty-first-century Los Angeles, San Diego, Denver, Salt Lake, and Albuquerque. Extensive agricultural areas, too, flourish from the basin’s flows. Imperial Valley and Mexicali Valley irrigators turn the Sonoran Desert green year-round along the U.S.-Mexico border, and they have countless counterparts. And lest we forget those whose ancestors had been in the basin for centuries or millennia—since time immemorial— before the modern cities and farms sprouted: Native peoples. They consist of thirty federally recognized tribes, including the Navajo Nation residing on a 27,413-square-mile reservation slightly larger than West Virginia.

These people see the Colorado River system through different eyes. If we’re being honest, some don’t see it at all, tapping flows from vast, out-of sight hinterlands for daily use without any sense of where their water comes from. Its origin is a living river system. Whether we’re mindful of that connection or not, it exists, placing us in community—a “basin community” — a character as diverse as the Grand Canyon’s dynamic colors and landforms. There’s no universal vision within this community. Rather, peoples’ wide-ranging reasons for appreciating, enjoying, even loving the river system have broadened considerably since 1922. Our values are plural. That, too, defines the centennial year.

Cornerstone is anchored in this soil. A body of writing about the Compact would be fitting based on its centennial alone—again, a pathbreaking document, warts and all. As fate would have it, however, this milestone arrives at an epic confluence. Climate change and the ongoing megadrought are the elephant in the room—unprecedented in recorded history and forcing that often anxiety-inducing thing for human beings: change. That applies in full force to negotiations over new management rules for the river system during the next several years. An inflection point of generational significance, these negotiations involve dynamics as challenging as any the basin community has faced. Never before have forty million people depended on the river system. Never before has the Law of the River amassed its existing girth and complexity. And never before has the river system been valued for so many diverse, potentially irreconcilable reasons. In a nutshell, there is the centennial itself, and there is the uncanny confluence of events merging with the centennial. Both considerations point in the same direction. . . .

The time is ripe for conversations about the Compact and broader Law of the River.

Jason Anthony Robison is a professor of law at the University of Wyoming. Reflecting his deep love of the American West, Professor Robison’s writing and teaching revolve around water, public lands, and Native peoples. He was lead editor of the sesquicentennial volume, Vision and Place: John Wesley Powell and Reimagining the Colorado River Basin, and he authors the long-running treatise, Law of Water Rights and Resources. 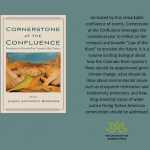