Will Croft Barnes (Author), Bernard L. Fontana (Foreword)
Paperback ($25.00), Ebook ($25.00) Buy
Will Croft Barnes (1858–1937) first came to Arizona as a cavalryman and went on to become a rancher, state legislator, and conservationist. From 1905 to 1935, his travels throughout the state, largely on horseback, enabled him to gather the anecdotes and geographical information that came to constitute Arizona Place Names.

For this first toponymic encyclopedia of Arizona, Barnes compiled information from published histories, federal and state government documents, and reminiscences of "old timers, Indians, Mexicans, cowboys, sheep-herders, historians, any and everybody who had a story to tell as to the origin and meaning of Arizona names." The result is a book chock full of oddments, humor, and now-forgotten lore, which belongs on the night table as well as in the glove compartment.

Barnes' original Arizona Place Names has become a booklover's favorite and is much in demand. The University of Arizona Press is pleased to reissue this classic of Arizoniana, which remains as useful and timeless as it was more than half a century ago.
"A somewhat eclectic, but unfailingly delightful, compilation of facts, folklore, humor, and personal opinion that has achieved the status of southwestern classic. . . . Fifty years after its first publication, it still ranks among the most important books published on the state."—Journal of Arizona History

"This paperback reissue of the original edition (1935) with a new foreward by Bernard L. Fontana will take another generation of readers on a delightful and exciting trip around Arizona stopping at such places as Wickyty-Wizz Canyon, Total Wreck, Christmas, Skull Valley, Freezeout Creek and Poker Mountain. Barnes' work remains an important contribution to Arizona history and literature. The enthusiasm of this pioneer soldier, rancher, and state legislator for his adopted state is contagious, as the new reader will soon discover."—Books of the Southwest

"Later editions have adopted the title and format, but the original Barnes has never been surpassed. 'Place Names' is a modest description, for the listings unleash a flow of history, folklore, geography, and etymology. And yes, even humor and romance. . . . If there is one indispensable Arizona book, Barnes's Arizona Place Names is it. Every man, woman, and child who sets foot in the Grand Canyon State should have this book at hand."—Arizona Highways

"Better buy a couple of copies, one for the car and one for whatever room you do your reading in."—Arizona Daily Star 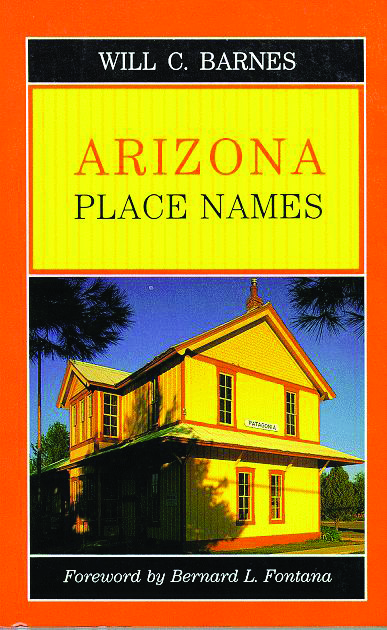