John Alcock (Author)
Paperback ($17.95), Ebook ($17.95) Buy
"Spring on the Sonoran Desert can be a four-month-long spectacle of life and color. Within these well-written pages, Alcock exposes us to the plant and animal life of a land many regard as desolate. To Alcock, the desert has a constant evolutionary beauty he never seems to tire of. Alcock's approach to his subject is an elegant combination of science and literature. Only the desert itself, arrayed in its April apparel, can rival the beauty of this book."—Arizona Highways

"Deserts are not as bereft of life as they seem; their barren landscapes can support a remarkable variety of plant and animal life, though it may require a patient and skilled naturalist to reveal its mysteries. John Alcock is just such a naturalist. . . . Alcock provides delightful insights into how insects provision their developing young, how parasites find their victims and how flowers attract pollinators. A book of this kind allows its author, more accustomed to the rigours and constraints of writing academic papers and books, to relate revealing anecdotes and simply to express their fascinating for natural history. . . . Books such as this serve a vital function in bringing the mysteries of the desert to the attention of a wider public." —Times Literary Supplement
"Lyrical ruminations on plant and animal life . . . witty and insightful, [Alcock] pries under rocks and peers around saguaro and brittlebush to explore a world teeming with activity and color. There is magic here, and Alcock conveys the wonder and mystery of seasonal change in a way that will appeal to newcomers and natives alike."—The Journal of Arizona History

"The story of how a zoologist has made this particular place his laboratory for both ecological and philosophical inquiry."—New York Times Book Review

"Depending on your perspective, you may view the rocky uplands of the northern Sonoran Desert as either a forlorn wasteland to assiduously avoid, or an intriguing realm teeming with biological puzzles to solve. Alcock, an insect behaviorist at Arizona State University, takes the latter view. . . . All readers . . . will undoubtedly appreciate the poignancy with which Alcock portrays his love of desert life and landscape."—Bioscience

"Sonoran Desert Spring is about the evolutionary significance of behaviour. . . . Holiday reading for all zoologists and a must for the desert specialist whose entomological knowledge is restricted to the performance of locusts and black beetles."—Journal of Biogeography 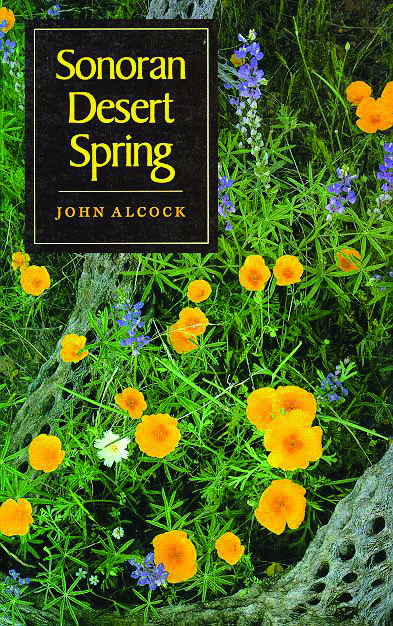