John Alcock (Author)
Paperback ($17.95), Ebook ($17.95) Buy
What could seem less inviting than summer in the desert? For most people, this prospect conjures up the image of relentless heat and parched earth; for biologist John Alcock, summer in Arizona's Sonoran Desert represents an opportunity to investigate the wide variety of life that flourishes in one of the most extreme environments in North America. "Only very special plants and animals can survive and reproduce in a place that may receive as little as six inches of rain in a year," observes Alcock, "a place where the temperature may rise above one hundred degrees each day for months on end." Yet he and other biologists have discovered here startling signs of life hidden in plain view under the summer sun:

- male digger bees compete to reach virgins underground during the early summer mating season;
- the round-tailed ground squirrel goes about its business, sounding alarm calls when danger threatens its kin;
- the big-jawed beetles Dendrobias mandibularis emerge in time to feast on saguaro fruits and to use their mandibles on rival males as well;
- Harris's hawks congregate in groups, showing their affinity for polyandry and communal hunting;
- robberflies mimic the appearance of the bees and wasps on which they prey;
- and peccaries reveal the adaptation of their reproductive cycle to the desert's seasonal rains.

The book's 38 chapters introduce readers to these and other desert animals and plants, tracing the course of the season through activities as vibrant as mating rituals and as subtle as the gradual deterioration of a fallen saguaro cactus. Enhanced by the line drawings of Marilyn Hoff Stewart, Sonoran Desert Summer is both an account of how modern biology operates and a celebration of the beauty and diversity that can be found in even the most unpromising places.
"A handsome, thoughtful record of nature observation and conceptual ecology in a very hard place to live."—New York Times

"We might mistake it for merely a sweet book of observations by a man who studies wasps and butterflies in the desert of central Arizona. It is that, but not merely that. John Alcock is an ecologist with a patient eye, a broad curiosity and a head full of well-honed questions, and this is his rumination about the way the world works. . . . The real charm of Mr. Alcock's book is that, while he tells us such cerebral things, he also shows us that scientific cognition isn't the only way to experience a glorious ecosystem."—David Quammen, New York Times Book Review

"Alcock captures the wonder and the science behind the lives of wood-boring beetles, zebra-tailed lizards, round-tailed ground squirrels, elk owls and saguaro caccti, among other species, during both the desert summers: sizzling, cloudless dry days of May and June, and the intermittent thunderstorms and downpours of the late summer monsoon season."—High Country News

"For anyone who has the slightest interest in the desert and its creatures, opening Alcock's book is like opening your eyes in the morning."—Arizona Daily Star

"The reader gets the sensation of traveling with the author through this landscape, at times learning from the professor and at other times sitting back and enjoying a beautiful place. It's a delightful mix."—Naturalist Review

"Thought-provoking and instructive and by no means lacking in appreciation of the beauties of nature . . . sound scientific natural history writing at its best."—Journal of Arid Environments 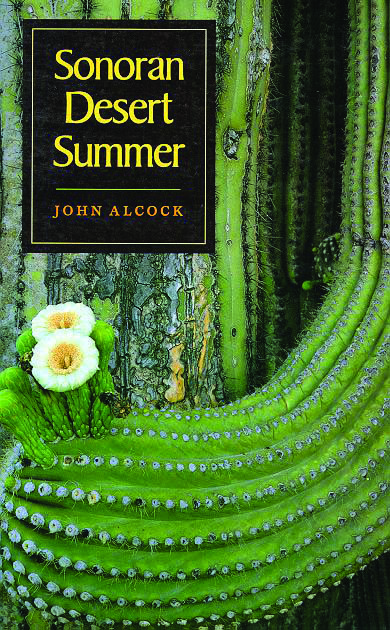