Carmen Giménez has been named Graywolf Press’s new executive director and publisher, succeeding Fiona McCrae, who retired after leading the press for 28 years.

Giménez has published three poetry collections with the University of Arizona Press: Bring Down the Little Birds, Milk and Filth, and Odalisque in Pieces.

Giménez, 51, a queer Latinx poet and editor, holds an MFA from the University of Iowa’s Writers Workshop. She is a professor in the English department at Virginia Tech University in Blacksburg, where she teaches creative writing in the MFA program.

She was also, until recently, publisher of Noemi Press, which announced on July 5 that Giménez was stepping down 20 years after she and Evan Lavender-Smith founded the press in 2002 with the release of a single chapbook. Noemi’s mission is to promote both emerging voices and established writers with an emphasis on writers from under-represented communities, including women, BIPOC writers, and LGBTQ writers. Noemi Press, a nonprofit organization, now publishes eight books each year in the fiction, nonfiction, drama, and criticism categories. Its authors have been winners of, and finalists for, such awards as the National Book Award, the Whiting Award, the PEN America Literary Awards, and the Lambda Literary Awards.

Graywolf published Giménez’s most recent collection of poetry, Be Recorder, in 2019. Be Recorder was a finalist for the National Book Award in Poetry, the PEN/Open Book Award, the Audré Lorde Award for Lesbian Poetry, and the Los Angeles Times Book Prize. Giménez also is the author of five other collections of poetry, including Milk and Filth, a finalist for the National Book Critics Circle Award for poetry. Her lyric memoir, Bring Down the Little Birds, won an American Book Award. 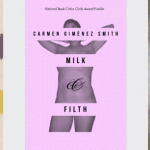