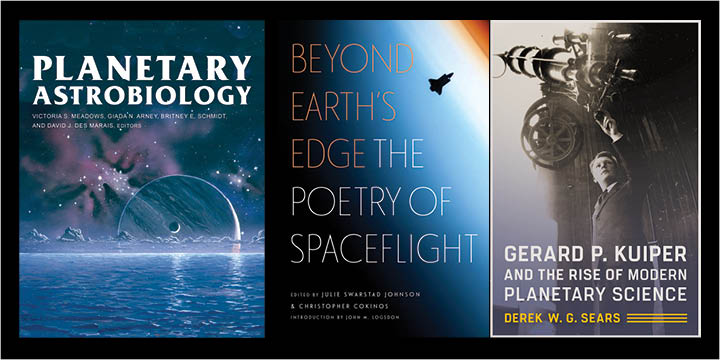 We are the proud publishers of a wide range of space science titles that inspire wonder and allow readers to delve into the universe. With poetry, art, photographs, history, and beyond, our space-centered books are out of this world! Through 11/1/2020, enjoy a 35% discount on all of our space titles when you use the code AZOUTERSPACE20 at checkout.

Beyond Earth’s Edge vividly captures through poetry the violence of blastoff, the wonders seen by Hubble, and the trajectories of exploration to Mars and beyond. The anthology offers a fascinating record of both national mindsets and private perspectives as poets grapple with the promise and peril of U.S. space exploration across decades and into the present.

Attend our virtual book release event for Beyond Earth’s Edge on October 8, 2020 at 7:00 P.M. MST! This free event will be co-hosted by the Flandrau Science Center and Planetarium. Register here!

“Only two of the contributors to this soaring, adroitly curated anthology actually traveled in space, but nothing stops the rest of them from vaulting skyward on a pillar of words, with a potent gravity-assist from their emotions.”—Dava Sobel, author of Galileo’s Daughter and The Glass Universe: How the Ladies of the Harvard Observatory Took the Measure of the Stars

Planetary Astrobiology represents the combined efforts of more than seventy-five international experts consolidated into twenty chapters and provides an accessible, interdisciplinary gateway for new students and seasoned researchers who wish to learn more about this expanding field. Readers are brought to the frontiers of knowledge in astrobiology via results from the exploration of our own solar system and exoplanetary systems.

Explore other titles in our Space Sciences Series here.

In Gerard P. Kuiper and the Rise of Modern Planetary Science, Derek W. G. Sears describes the life of a man who lived through some of the most dramatic events of the twentieth century and ended up creating a new field of scientific research, planetary science. As NASA and other space agencies explore the solar system, they take with them many of the ideas and concepts first described by Gerard P. Kuiper.

We are so thrilled that Gerard P. Kuiper and the Rise of Modern Planetary Science won a Foreword Indies Award! Read an excerpt from the book here.

The most outstanding and uniquely curated selection of Mars orbital images ever assembled in one volume. With explanatory captions in twenty-four languages and a gallery of more than 200 images, Mars: The Pristine Beauty of the Red Planet brings a timely and clear look at the work of an active NASA mission.

“For scientists, this book may be a record of Martian geology, history, and even a search for possible future landing sites, while astronomy enthusiasts will find a snapshot of our current scientific understanding of the planet. Dreamers will use it as a tool for a journey through time and space.”—Sky at Night Magazine

Under Desert Skies describes how a small lunar- and planetary-focused laboratory at the University of Arizona forged the field of planetary science at a time when few people studied the solar system. Spanning six decades, the book records the stories of the scientists who, with telescopes and spacecraft, transformed single points of lights into worlds that we can see, touch, study, and compare to Earth.

“A fascinating story of how a small university department became a major powerhouse in our exploration of the solar system, and of how our knowledge of the solar system blossomed with the space age.” —Derek Sears, Space Science and Astrobiology Division, NASA Ames Research Center

Human Spaceflight lays out a new model for the future of humans in space, where robotic technologies extend human presence beyond the solar system. Louis Friedman argues for settlement of Mars, serving as a base for humans to explore the rest of the universe with an expanding arsenal of technology.

“Most books about our future in space are written by dreamers. But Human Spaceflight: From Mars to the Stars is written by an aerospace engineer, Dr. Louis Friedman, who details exactly how exploration needs to unfold if our species is to value it at all.”—Neil deGrasse Tyson, Astrophysicist, American Museum of Natural History

Earth and Mars relates the life story of two planets, celestial siblings in space. The book is a fusion of art and science, a blend of images and essays celebrating the successful creation of our life-sustaining planet. A collection of simple and profoundly beautiful forms, Earth and Mars provides a context to appreciate the common forces responsible for these haunting shapes as well as the divergent paths that led to an Earth teeming with life-forms, while its sibling, Mars, is seemingly devoid of all life. 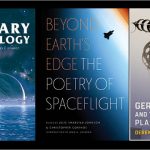