The Desert Feast offers a food pilgrimage, where stories and recipes demonstrate why the desert city of Tucson became America’s first UNESCO City of Gastronomy.

The excerpt tells part of the story of Sonoran wheat and how its introduction forever changed our region’s food landscape:

The easy and quick adoption of spring wheat can be attributed to the fact that it filled an important niche in the food cycle. And, as a new crop, it came without cultural baggage. Corn was traditionally planted and curated through its lifecycle with ceremony and song; wheat, on the other hand, with no such requirements, was easier to grow. We must not overlook the fact, though, that in some mission communities, the local people had no choice but were forced to grow wheat for the padres’ sacramental wafers.

By the mid-eighteenth century, spring wheat had become the major staple crop of the Tucson basin and far beyond. Although it does better with irrigation, in a normal, non-drought year, it could also produce an excellent crop in marginal soils of low fertility and with no water other than winter rainfall. With the abundance of wheat, women began making tortillas from flour instead of corn. 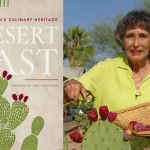