On Thursday, February 25, the University of Arizona Press presented an online event with historian and MacArthur Fellow Stephen J. Pyne to discuss and celebrate his new book, The Great Ages of Discovery: How Western Civilization Learned About a Wider World.

Joining Pyne was event moderator Kevin J. Fernlund, author of William Henry Holmes and the Rediscovery of the American West. Together they discussed Pyne’s inspiration and interest in exploration, history, and how Pyne identifies three great ages of discovery in his fascinating new book.

The first age of discovery ranged from the early 15th to the early 18th century, sketched out the contours of the globe, aligned with the Renaissance, and had for its grandest expression the circumnavigation of the world ocean. The second age launched in the latter half of the 18th century, spanning into the early 20th century, carrying the Enlightenment along with it, pairing especially with settler societies, and had as its prize achievement the crossing of a continent. The third age began after World War II, and, pivoting from Antarctica, pushed into the deep oceans and interplanetary space. Its grand gesture is Voyager’s passage across the solar system. Each age had in common a galvanic rivalry: Spain and Portugal in the first age, Britain and France—followed by others—in the second, and the USSR and USA in the third. 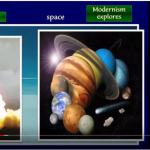