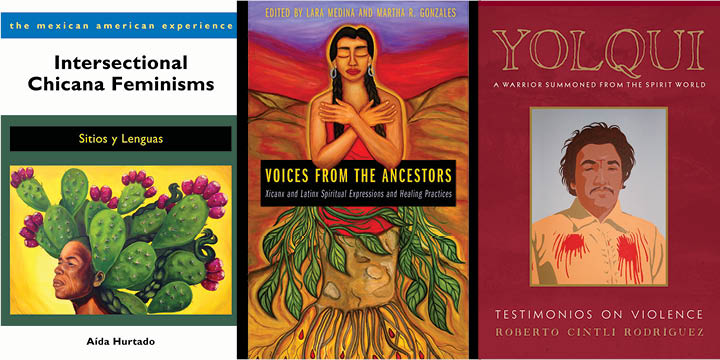 We are really missing the NACCS annual meeting right now, so here is a roundup of our latest titles in Latinx studies that we would have been proudly displaying at the conference this year.

Use the code AZNACCS20 to receive 30% off and free shipping on all of the titles mentioned in this post!

Our editor-in-chief, Kristen Buckles, acquires in this field. To propose a project, contact her atKBuckles@uapress.arizona.edu.

Latinx Ciné in the Twenty-First Century is a timeless volume and a significant analysis of the burgeoning field of Latinx filmmaking. Editor Frederick Luis Aldama has gathered together some of the best writing on Latinx ciné in the twenty-first century. Today’s filmmakers show the world a rich Latinidad informed by a complexly layered culture replete with history, biography, and everyday experiences.

In Reel Latinxs, experts in Latinx pop culture Frederick Luis Aldama and Christopher González explain the real implications of Latinx representation in mainstream TV and film. They also provide a roadmap through a history of mediatized Latinxs that rupture stereotypes and reveal nuanced reconstructions of Latinx subjectivities and experiences.

Read a conversation between the editors here, and watch a video on the topic here.

Daniel D. Arreola’s Postcards from the Chihuahua Border is a colorful and dynamic visual history of Mexico’s northern border. Drawing on more than three decades of archival work, Arreola invites the reader to time travel, to revisit another era—the first half of the last century—when the border towns of Ciudad Juárez, Ojinaga, and Palomas were framed and made popular through picture postcards.

Sown in Earth is a collection of personal memories, which speak to the larger experiences of hard-working migratory men. By crafting a written journey through childhood traumas, poverty, and the impact of alcoholism on families, Fred Arroyo clearly outlines how his lived experiences made him want to become a writer. Sown in Earth is a shocking yet warm collage of memories which serve as more than a memoir or an autobiography. Rather, Arroyo recounts his youth through lyrical prose to humanize and immortalize the hushed lives of men like his father, honoring their struggle and claiming their impact on the writers and artists they raised.

Read an interview with the author here.

Meditación Fronteriza is a beautifully crafted exploration of life in the Texas-Mexico borderlands. Written by award-winning author Norma Elia Cantú, the poems flow from Spanish to English gracefully as they explore culture, traditions, and solidarity.

Watch a conversation between Norma Cantú and our publicity manager, Mari Herreras, here. Then, read an interview about the collection and a poem here.

Kafka in a Skirt is not your ordinary short story collection. In his newest work, Daniel Chacón subverts expectation and breaks down the walls of reality to create stories that are intriguing, hilarious, and deeply rooted in Chicano culture.

Indigenous Interfaces rejects the myth that Indigeneity and information technology are incompatible through its compelling analysis of the relationships between Indigenous peoples and new media. The volume illustrates how Indigenous peoples are selectively and strategically choosing to interface with cybertechnology, highlights Indigenous interpretations of new media, and brings to center Indigenous communities who are resetting modes of communication and redirecting the flow of information. It convincingly argues that interfacing with traditional technologies simultaneously with new media gives Indigenous peoples an edge on the claim to autonomous and sovereign ways of being Indigenous in the twenty-first century.

In Saints, Statues, and Stories, beloved folklorist James S. Griffith introduces us to the roadside shrines, artists, fiestas, saints, and miracles of northern Mexico. Full-color images add to the pleasure of this delightful journey through the churches and towns of Sonora.

Listen to an interview with “Big Jim” Griffith here.

Reading Popol Wuj offers readers a path to look beyond Western constructions of literature to engage with this text through the philosophical foundation of Maya thought and culture. This guide deconstructs various translations to ask readers—scholars, teachers, and graduate and undergraduate students—to break out of the colonial mold in approaching this seminal Maya text.

The early 1960s are remembered for the emergence of new radical movements. One such protest movement rose in the Mexican state of Chihuahua. With large timbering companies moving in on the forested sierra highlands, campesinos and rancheros did not sit by as their lands and livelihoods were threatened. Agrarian Revolt in the Sierra of Chihuahua, 1959-1965 is the story of how they organized and demanded agrarian rights—ultimately with deadly consequences.

How did men become the stars of the Mexican intellectual scene? In Dude Lit, Emily Hind examines the tricks of the trade and reveals that sometimes literary genius rests on privileges that men extend one another and that women permit.

Explore other books in the Mexican American Experience series here.

Watch a recording of a live Zoom event with the editors and several contributors of Voices from the Ancestors here, then read an interview with the editors, Lara Medina and Martha R. Gonzales, here.

Mexican Waves takes us to a time before the border’s militarization, when radio entrepreneurs, listeners, and artists viewed the boundary between the United States and Mexico the same way that radio waves did—as fluid and nonexistent. Author Sonia Robles explains how Mexican radio entrepreneurs targeted the Mexican population in the United States decades before U.S. advertising agencies realized the value of the Spanish-language market and demonstrates Mexico’s role in shaping the borderlands.

Yolqui, a Warrior Summoned from the Spirit World is a testimonio, a historia profoundo of the culture of extralegal violence against the Red-Black-Brown communities in the United States that operates with impunity. Framed by Roberto Cintli Rodríguez’s personal testimony of police violence, this book is a clarion call to end that violence and those philosophies that permit such violence to flourish.

Read an excerpt from the book here, and read summaries of two book events held on the University of Arizona campus here and here.

The increasingly militarized U.S.-México border is an intensely physical place, affecting the bodies of all who encounter it. The essays in The Border and Its Bodies explore how crossing becomes embodied in individuals on the most basic social unit possible: the human body.

Unwriting Maya Literature provides an important decolonial framework for reading Maya and other Indigenous texts. Through insightful analyses of Maya cultural productions—whether textiles or poetry—this perspective offers a point of departure for the study of Maya literature and art that is situated in an Indigenous way of performing the act of reading.

Listen to two podcasts about the book here.

Based on more than twenty years of border activism in San Diego–Tijuana and El Paso–Ciudad Juárez, Coloniality of the US/Mexico Border is an interdisciplinary examination that considers the 1984 McDonald’s massacre, Minutemen vigilantism, border urbanism, the ongoing murder of women in Ciudad Juárez, and anti-border music. It is a theoretical and pragmatic analysis of the future of violence at—and because of—national territorial borders, and it offers a call for epistemic and cartographic disobedience.

Don’t forget, the University of Arizona Press is offering 40% off all e-books right now! Use the code AZEBOOK40 at checkout. Also, keep an eye on our social media for a different free e-book of the week every week! 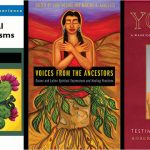