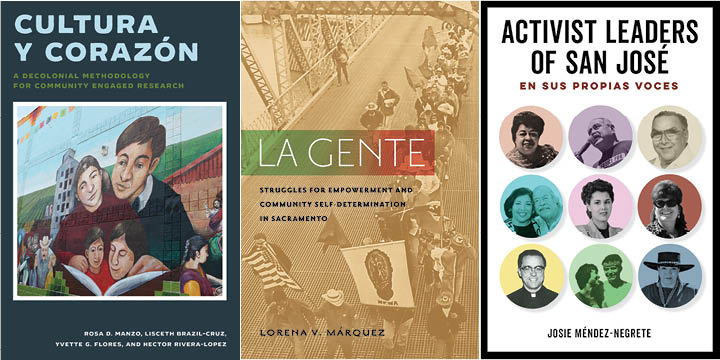 At the University of Arizona Press, we have published a wide range of books that celebrate Latinx and Chicanx communities, document community histories, and record the histories and lives of civil rights movements and activists. We want to share our most recent community and activism-focused titles with you, and invite you to use the discount code AZCOMMUNITY20 for 35% off these titles through 11/15/2020.

La Gente traces the rise of the Chicana/o Movement in Sacramento and the role of everyday people in galvanizing a collective to seek lasting and transformative change during the 1960s and 1970s. In their efforts to be self-determined, la gente contested multiple forms of oppression at school, at work sites, and in their communities.

On Thursday, October 15, 2020 join University of Arizona Press authors Josie Méndez-Negrete and Lorena V. Márquez for a virtual discussion on their recent University of Arizona Press books that focus on community and activist histories in San Jose and Sacramento, California. This event is currently full, but watch our website to see a recording of the event in coming days.

Challenging stereotypes, Activist Leaders of San José by Josie Méndez-Negrete book unearths and makes visible lived experiences of Chicana and Latino activists from San José, California, who made contributions to the cultural and civic life of the city. Through oral histories, we see a portrait of grassroots leadership in the twentieth century.

Don’t forget to check out the event mentioned above!

On Thursday, October 22, 2020 we are hosting an event with the editors of this book! Registration is currently full, but be sure to check back on our website for a recording of the event. Listen to a recording of Gloria reading some of her uncollected and unpublished poems here.

Listen to an NPR interview with author Vanessa Fonseca-Chávez here. Then, read an excerpt from the book here.

With unity of heart and mind, the creative and the scholarly, Decolonizing Latinx Masculinities opens wide its arms to all non-binary, decolonial masculinities today to grow a stronger, resilient, and more compassionate new generation of Latinxs tomorrow.

Listen to Frederick Luis Aldama talk about the book on the New Books Network podcast here, then read an interview with editors Arturo J. Aldama and Frederick Luis Aldama here. On Thursday, October 22, 2020, there will be a virtual book release celebration for Decolonizing Latinx Masculinities. Register here.

“Hurtado once again offers a brilliant analysis of Chicana feminisms that is historically situated and honors the legacies of early Chicana feminists. She advocates for and demonstrates the importance of an intersectional, multidisciplinary, and activist understanding of Chicanas.”—Yvette G. Flores, author of Chicana and Chicano Mental Health: Alma, Mente y Corazón

Watch a recording of an incredible panel with the editors and some of the contributors of this book here.

Yolqui, a Warrior Summoned From the Spirit World is a testimonio, a historia profoundo of the culture of extralegal violence against the Red-Black-Brown communities in the United States that operates with impunity. Framed by Roberto Cintli Rodríguez’s personal testimony of police violence, this book is a clarion call to end that violence and those philosophies that permit such violence to flourish.

Read an excerpt from the book here, and read about the Feminist Wire book series here.

Chicano Communists and the Struggle for Social Justice traces the early roots of the Chicano Movement. It follows the thread of radical activism of the 1930s and 1940s to today, showing thedepth of its influence on Mexican Americans struggling to achieve social justice and equality.

“Buelna’s book adds another layer to our understanding of American communism at mid-century, as well as the labor fight, community, and race.”–R.D. Screws, Choice Reviews

Listen to a book review of Chicano Communists and the Struggle for Social Justice on Buelna News here.

The first of its kind, Community-Based Participatory Research: Testimonios from Chicana/o Studies is a trailblazing collection of personal testimonies that showcase how understandings of community empowerment are incomplete as they have dismissed the variety of ways communities themselves have created social change strategies. In first-person accounts, Chicana/o researchers share their experience doing community-based participatory research (CBPR) praxis to illustrate its complexity and how it might be implemented to create sustainable change and community empowerment.

Food Fight! contributes to urgent discussions around the problems of cultural misappropriation, labeling, identity, and imaging in marketing and dining establishments. Not just about food, restaurants, and coffee, this volume employs a decolonial approach and engaging voice to interrogate ways that mestizo, Indigenous, and Latinx peoples are objectified in mainstream ideology and imaginary.

“Every essay will fill a reader—millennial mestizo or just plain old Chicano—with joyous smiles at the zingers. Advertencia! This book is not one for idle consumption, it’s not fast food. Paloma Martinez-Cruz dishes up a scholarly dissertation of substantial complexity with a heaping portion of humor, verbal sleight-of-hand, and barely-restrained ire.”—La Bloga 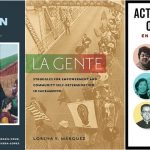