We are excited to be participating in the first virtual Western History Association conference! As always, we are pleased to offer a conference discount. Use code AZWHA20 to receive 40% off all titles, and get free shipping.

If you are participating in the virtual WHA, make sure to visit our virtual exhibit and chat with us. If you have questions about submitting a manuscript for our history list, contact our editor-in-chief Kristen Buckles at kbuckles@uapress.arizona.edu and view our guidelines here. To learn about requesting exam copies, visit here. We look forward to seeing all of you in person again in the future.

La Raza Cosmética by Natasha Varner examines postrevolutionary identity construction as a project of settler colonialism that at once appropriated and erased indigeneity. In its critique of Indigenous representation, it also shows how Indigenous women strategically engaged with and resisted these projects as they played out in beauty pageants, films, tourism, art, and other realms of popular culture.

Colonial Legacies in Chicana/o Literature and Culture by Vanessa Fonseca-Chávez traces the development of Chicana/o literature and cultural production from the Spanish colonial period to the present. In doing so, it challenges us to look critically at how we simultaneously embody colonial constructs and challenge their legacies.

Listen to the author discuss the topics in this book on an NPR podcast here, then read an excerpt from the book here.

La Gente by Lorena V. Márquez traces the rise of the Chicana/o Movement in Sacramento and the role of everyday people in galvanizing a collective to seek lasting and transformative change during the 1960s and 1970s. In their efforts to be self-determined, la gente contested multiple forms of oppression at school, at work sites, and in their communities.

Informed by personal experience and offering an inclusive view, Diné Identity in a Twenty-First-Century World by Lloyd L. Lee showcases the complexity of understanding and the richness of current Diné identities.

Learn how to register for a program featuring the authors, Nancy J. Parezo and Don D. Fowler, here.

Challenging stereotypes, Activist Leaders of San José by Josie Méndez-Negrete unearths and makes visible lived experiences of Chicana and Latino activists from San José, California, who made contributions to the cultural and civic life of the city. Through oral histories, we see a portrait of grassroots leadership in the twentieth century.

Join the waitlist for an upcoming event that features this author here.

In North American Borders in Comparative Perspective leading scholars provide a contemporary analysis of how globalization and security imperatives have redefined the shared border regions of the United States, Canada, and Mexico.

Watch an interview with the editors, Guadalupe Correa-Cabrera and Victor Konrad here.

This anthology offers a unique and sweeping view of the nation’s fire scene by distilling observations on Florida, California, the Northern Rockies, the Great Plains, the Southwest, the Interior West, the Northeast, Alaska, the oak woodlands, and the Pacific Northwest into a single, readable volume. The essays offer a color-commentary companion to the play-by-play narrative offered in Pyne’s Between Two Fires: A Fire History of Contemporary America.

To the Last Smoke is Stephen J. Pyne’s way of “keeping with it to the end,” encompassing the directive from his rookie season as a wildland firefighter to stay with every fire “to the last smoke.”

Watch Stephen Pyne talk about his To the Last Smoke series here, and read an excerpt from the book here. Then, read Pyne’s recent op-ed in the Los Angeles Times here.

Binational Commons focuses on whether the institutions that presently govern the U.S.-Mexico transborder space are effective in providing solutions to difficult binational problems as they manifest themselves in the borderlands. The volume addresses key binational issues and explores where there are strong levels of institutional governance development, where it is failing, how governance mechanisms have evolved over time, and what can be done to improve it to meet the needs of the U.S.-Mexico borderlands in the next decades.

Learn how to register for a lecture featuring the editors, Tony Payan and Pamela L. Cruz, here.

Soldiers, Saints, and Shamans by Nathaniel Morris documents how and why the Indigenous Náayari, Wixárika, O’dam, and Mexicanero peoples took part in the Mexican Revolution as they struggled to preserve their cultures, lands, and political autonomy in the face of civil war, bandit raids, and radical political reform. In unpacking the ambiguities that characterize their participation in this tumultuous period, it sheds light on the inner contradictions of the revolution itself.

The book explores the ongoing effects of colonization and emphasizes Native American tribes as governments rather than ethnic minorities. Combining elements of legal issues, human rights issues, and sovereignty issues, Indigenous Environmental Justice creates a clear example of community resilience in the face of corporate greed and state indifference.

This volume of the Indigenous Justice series explores the global effects of marginalizing Indigenous law. The essays in Traditional, National, and International Law and Indigenous Communities argue that European-based law has been used to force Indigenous peoples to assimilate, has politically disenfranchised Indigenous communities, and has destroyed traditional Indigenous social institutions. The research in this volume focuses on the resurgence of traditional law, tribal–state relations in the United States, laws that have impacted Native American women, laws that have failed to protect Indigenous sacred sites, the effect of international conventions on domestic laws, and the role of community justice organizations in operationalizing international law.

Narratives of Persistence charts the remarkable persistence of California’s Ohlone and Paipai people over the past five centuries. Lee M. Panich draws connections between the events and processes of the deeper past and the way the Ohlone and Paipai today understand their own histories and identities.

Read an interview with the author here.

Horsefly Dress is a meditation on the experience and beauty of suffering. Rich in the imagery of autumnal foliage, migrating birds, and frozen landscapes, Heather Cahoon’s collection calls forth the sensory experience of grief and metamorphosis. The transformative powers associated with the human experience of loss belong to the past, present, and future, as do the traditional Salish-Pend d’Oreille stories that create the backbone of these intricate poems.

Watch a virtual book release recording of Heather here, and read a short interview with her here. 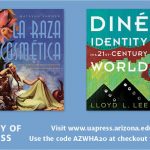