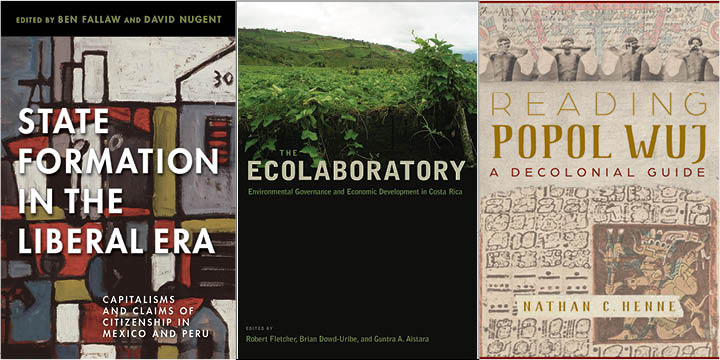 Listen to a conversation between Simón Ventura Trujillo and artist Vick Quezada here.

Colonial Cataclysms explores the human and environmental consequences of the global climate event called the Little Ice Age as it played out in central Mexico during the era of Spanish imperialism. It focuses on the great floods, massive soil erosion, and human adaptations to these cataclysms.

Reading Popol Wuj offers readers a path to look beyond Western constructions of literature to engage with this text through the philosophical foundation of Maya thought and culture. This guide deconstructs various translations to ask readers—scholars, teachers, and graduate and undergraduate students—to break out of the colonial mold in approaching this seminal Maya text.

Language, Coffee, and Migration is an ethnography that takes us to remote Amazonian villages, dusty frontier towns, roadside bargaining sessions, and coffee traders’ homes to offer a new view of settlement frontiers as they are negotiated in linguistic interactions and social relationships. The book brings together a fine-grained analysis of multilingualism with urgent issues in Latin America today. It is a timely on-the-ground perspective on the agricultural colonization of the Amazon, which has triggered an environmental emergency threatening the future of the planet.

In North American Borders in Comparative Perspective leading scholars provide a contemporary analysis of how globalization and security imperatives have redefined the shared border regions of the United States, Canada, and Mexico.

Watch an interview with Guadalupe Correa-Cabrera and Victor Konrad here.

Listen to Carwil Bjork-James talk about the book in a podcast here.

We are thrilled that Smithsonian Magazine selected Sugarcane and Rum for their weekly reading series! Read an excerpt from the book here.

Mexican Waves takes us to a time before the border’s militarization, when radio entrepreneurs, listeners, and artists viewed the boundary between the United States and Mexico the same way that radio waves did—as fluid and nonexistent. Author Sonia Robles explains how Mexican radio entrepreneurs targeted the Mexican population in the United States decades before U.S. advertising agencies realized the value of the Spanish-language market and demonstrates Mexico’s role in shaping the borderlands.

Utilizing archival and ethnographic research, Racial Alterity, Wixarika Youth Activism, and the Right to the Mexican City explores the construction of racial and ethnic imaginaries in the western Mexican cities of Guadalajara and Tepic, and the ways in which these imaginaries shape the contemporary experiences and activism of Wixarika (Huichol) Indigenous university students and professionals living, studying, and working in these two cities.

Read some thoughts on the book by Diana Negrín here.

Read an interview with the editors here, then watch a recorded virtual event for the book here.

Building on the most recent scholarship in borderlands history, The Intimate Frontier is an intellectual and social history that explores the immensely complex web of interpersonal relationships and layers of emotional sophistication inherent among frontier communities.

How “Indians” Think shines light on Indigenous perspectives of Spanish colonialism through a novel interpretation of the works of the two most important Amerindian intellectuals in the Andes, Felipe Guaman Poma de Ayala and Garcilaso de la Vega, el Inca. Departing from the predominant scholarly position that views Indigenous-Spanish relations as the clash of two distinct cultures, Gonzalo Lamana argues that Guaman Poma and Garcilaso were the first Indigenous activist intellectuals and that they developed post-racial imaginaries four hundred years ago.

Listen to Gonzola Lamana on this podcast.

Memories of Earth and Sea explores the daily struggles of islanders living in one of South America’s most culturally distinct regions: the Chiloé Archipelago. Connecting the early history of the islands with the industrialization of the last forty years, the book presents a unique study of large-scale economic changes and the impact these can have on the memories and the collective identity of a people.

Detours is an attempt to crack cultural imperialism by bringing forth the personal as political in academia and research. Speaking from the intersection of race, class, and gender, the contributors explore the hubris and nostalgia that motivate returning again and again to a particular place. Through personal stories, they examine their changing ideas of Latin America and the Caribbean and how those places have shaped the people they’ve become, as writers, as teachers, and as activists.

Daniel D. Arreola’s Postcards from the Chihuahua Border is a colorful and dynamic visual history of Mexico’s northern border. Drawing on more than three decades of archival work, Arreola invites the reader to time travel, to revisit another era—the first half of the last century—when the border towns of Ciudad Juárez, Ojinaga, and Palomas were framed and made popular through picture postcards.

In Reel Latinxs, experts in Latinx pop culture Frederick Luis Aldama and Christopher González explain the real implications of Latinx representation in mainstream TV and film. They also provide a roadmap through a history of mediatized Latinxs that rupture stereotypes and reveal nuanced reconstructions of Latinx subjectivities and experiences.

Read a conversation between Christopher and Frederick here, then watch a video discussion here.

Latinx Ciné in the Twenty-First Century is a timeless volume that is a significant analysis of the burgeoning field of Latinx filmmaking. Editor Frederick Luis Aldama has gathered together some of the best writing on Latinx ciné in the twenty-first century. Today’s filmmakers show the world a rich Latinidad informed by a complexly layered culture replete with history, biography, and everyday experiences.

Unwriting Maya Literature provides an important decolonial framework for reading Maya and other Indigenous texts. Through insightful analyses of Maya cultural productions—whether textiles or poetry—this perspective offers a point of departure for the study of Maya literature and art that is situated in an Indigenous way of performing the act of reading.

We are so thrilled that Unwriting Maya Literature was awarded an honorable mention for the LASA Mexico Section award this year! Listen to these podcasts about the book.

How did men become the stars of the Mexican intellectual scene? Dude Lit examines the tricks of the trade and reveals that sometimes literary genius rests on privileges that men extend one another and that women permit. Drawing on interviews, archival materials, and critical readings, this provocative book changes the conversation on literature and gendered performance.

We are so excited that Dude Lit was also awarded an honorable mention for the LASA Mexico Section award this year!

Don’t forget that the University of Arizona Press is currently offering 40% off all ebooks with the code AZEBOOK40! 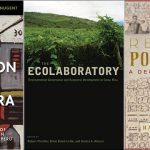